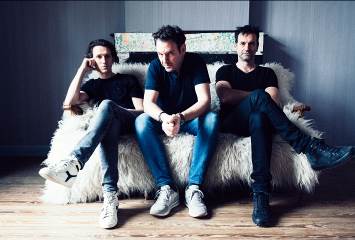 With music produced and mixed by Alex Newport (City and Colour, Bloc Party, At The Drive In), and mastered by Carl Saff (Bambara, Algiers, Public Practice), the stage has been set for the arrival of one of 2022’s most unusual ensembles; a band that didn’t intend to make an album, never mind release it.

Why? Because the trio have been here before, two decades ago as college students. Reformed for fun rather than fame, with a new name and different aims, but as much love of harmony-soaked, melodic rock as ever, their plan to put the music first is already paying dividends.

Joyous, jangly lead single ‘The Summers We Missed’, with its sumptuous harmonies and debt to early Lemonheads, captures both the laid-back spirit of CMON CMON and their tales of life experience as opposed to first love.

“The song is a true story, one I wouldn’t have been able to write aged 20,” says singer, guitarist and main songwriter Jorrit Hermans. “The summer in question is 1995. The party was real and, so was Julie. In the second verse, the narrative jumps 20 years ahead to another summer where they meet again and reminisce about what might have been.”

Accompanied by a video from Volstok animation Creative Director Wouter Sel,whose visual concept embraces what he describes as an illustrational twist, the song is given a surreal and moving counterpoint, as Wouter describes, “As an animation director I love embracing the impossible and visualising a story’s emotions in highly imaginative voices, but this concept could only work in live action, so I decided to fully embrace that. The masks are a strong representation of our perceptions and immediately make you feel somewhat uncomfortable. As soon as those went on when we were shooting in that haunting house, I could feel it all coming together. We were stuck in time.’

It was Jorrit who contacted his fellow band members – bassist Steven Omblets and drummer Michel Becx – in 2019 after 20 years apart. Now in their 40s, but still living near each other in northeast Belgium, they had lost touch while establishing diverse careers – Jorrit in advertising, Steven as a sociology lecturer and Michel as an estate agent. “I’d started writing songs again and remembered how much fun it was when the three of us used to craft them together,” says Jorrit. “I called them and asked if they would like to get in a rehearsal room to see how it went. Immediately, the chemistry between us was back.”

When lockdown came along, they’d already decided to do a demo, maybe even release an EP. But before they knew it, an album’s worth of songs was written and a list of fantasy producers compiled to contact. In truth, they expected to hear nothing back from Alex Newport, whose work with Death Cab For Cutie they all admired. But immediately he mailed back, saying he loved the songs and signed on to produce. His passion for the band and the first single in particular was emphatic, saying “The Summers We Missed” is an instant powerpop classic with those wonderfully bittersweet lyrics that CMON CMON excel at. Love the driving guitars and vocal harmonies on this one!”

Recording locally in Brussels and at Trypoul Studios in the Netherlands (on rare vintage equipment), the trio linked remotely to Newport’s Future Shock Studio in L.A. to polish the songs which were then mixed and mastered by Carl Saff in Chicago. Deciding they might need a manager CMON CMON chanced their arm with Budd, whose illustrious career they had long admired. Once again, to their shock, an email came back full of love for the songs.

Although initially, CMON CMON thought that they may not perform live, 2022 will see the band play select shows across Europe and the UK, “These songs were written to capture us in this moment, not to make us rock stars posing on stage,” says Steven. “But the reaction we’ve had has convinced us otherwise. To our own amazement, we’re going to tour.”