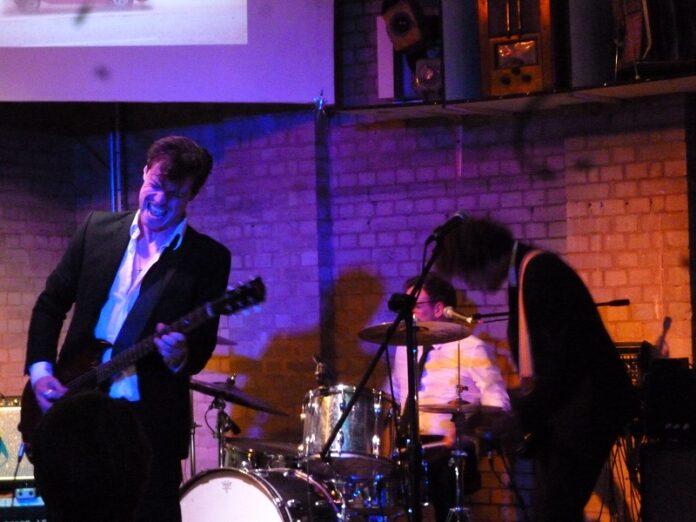 Tagged by Classic Rock magazine as A ram-jam barrage of 50`s Rock `n` roll mania shot through with punk venom, His lordship are the project from Pretenders guitarist James Walbourne and drummer Kristoffer Sonne. The fellas have a six track EP called `All Cranked Up` and are out on a nine day trek in support of said release.

The music quietens as the duo who are accompanied by Dave Page on this tour rush down the stairs, jump onstage and head into a blistering version of ` I Live In The City` before midway through the number stops and James shares that he has broken two strings on his guitar. The guys exit and return about ten minutes later, with restrung guitar and resume where they left off.

Title track from the extended play `All Cranked Up` gets an airing before another cut the chant like `I’m So Bored Of Being Bored` blasts out. The grinding `Buzzkill` and `Jackie Works For The NHS` which reminds me a little of the early quite forceful Clash punk records show no let-up in pace. The strangely titled `Rock Fall Echo Dust` which may be a reference to Hamish Fulton is a kind of stop-start number and seemed to venture into The Stray Cats territory.

I love the retro instrumental `Sleepwalk` which you could imagine would have all the Hipsters or Hepcats slow dancing if this way played back in the fifties. Drummer Kristoffer allows Dave to take over the reins while he sings and shares the rather odd `My Brother Is An Only Child` whilst standing on a drum unit and heading into this intimate crowd.  I`m not sure if this really worked but it seemed to disrupt the flow and if anything, prove that although being a great drummer doesn`t necessarily make for being a great frontman.

The show continues with a further instrumental with the scorching `Run Chicken Run` before we get a cracking version of Jack Scott`s enticing `The Way I Walk` before the slow burn of `The Repenter` from the latest release. There`s a fast paced quite rockabilly number in `Joy Boy` with some quite high pitched vocals and the final instrumental, `Cat call` which is a driving fast paced offering.

The show closes out with `I Am In Amsterdam` and the trio leave us after a fairly passionate forty minutes of musical mayhem.

Tonight, was a sweaty and sweltering night both on and off the stage and it would be easy to write the band off as a fifties retro nostalgia trip as they`re so much more and have had crowds queuing around the block in London to gain admittance to see them.

This band could go as far as they want and i`m sure it`ll depend on other commitments they have so my advice would be to catch them while you can or invest in the EP.