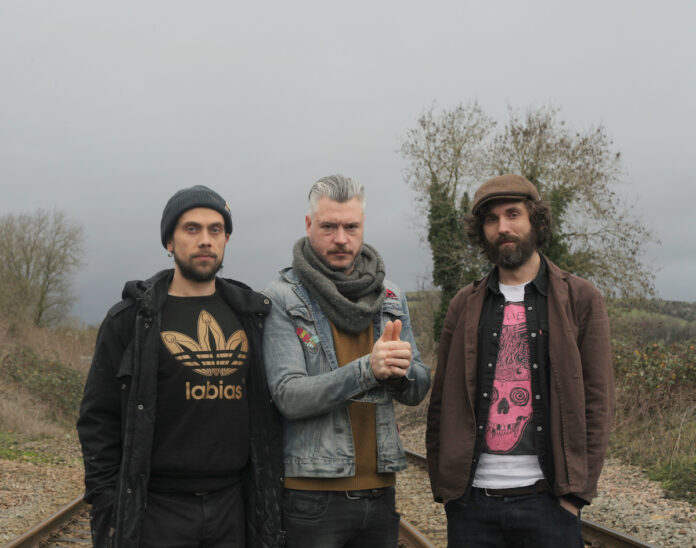 Reflecting on the prevalence of misinformation and its ability to corrupt and distort reality for those who fail to think critically, the track is the latest to be taken from the band’s debut self-titled album HOLY POPES which will be released on 27th January 2023 via Hull-based independent label Man Demolish Records (NEWMEDS).

Commenting on the track, guitarist Dominic Knight (ex-The Eighties Matchbox B-Line Disaster) says: “Jerry is a person we may or may not know. Someone who was swayed by misinformation, who didn’t know the consequences or particularly think about them. Jerry meant well, but maybe without an idea of who for. Politics has been deeply polarised and the right have gained a foothold not seen across the world for many many years. So many people get caught up in the lies and misinformation coercively spread by propaganda; perfectly kind, decent folks are accidentally becoming bigots.”

“I like to hold the idea in my heart that we are all compassionate beings, and that it’s our duty to show empathy and kindness to those we may agree with the least. I once had a conversation with a guy in the pub about Brexit, and we disagreed in a big way, but he was a thoughtful, loving man who just didn’t understand the wider implications of his vote, and I didn’t want to hold anything against him. The language around migration, around control, around human rights, it all comes from a place of hatred and othering. We have the space, we have the land, we have the houses and we have the wealth…it is just distributed in the wrong way, by the wrong people.”

The track is the second to be taken from the forthcoming self-titled album, following on from visceral early singles ‘DBT’ and ‘Pencils’ which showcased the band’s twitching, erratic take on post-garage punk for the first time and picked up a swathe of support from underground alternative tastemakers.

“We never had the intention of making an album,” explains Knight. “This whole project was never about creating something for the outside world, we were making music for ourselves. It was only after playing some shows and getting asked when we were releasing material did we consider it. Shortly after that, Dom from Man Demolish records got in touch and it all just fell into place.”

The band produced the album themselves and it was recorded and produced by drummer ​​Luke Bujniewicz in his own studio. “It was the first time I’d taken on a whole album,” he says of the experience. “I approached it in an organic way, favouring the live energy over perfect musicianship, resulting in a raw and powerful LP.”

HOLY POPES spent a year and a half finishing the songs and recorded all the tracks in just over a day. “Having our own control over our record made such a difference and I don’t think any of us could be happier about the results,” continues Knight. “We didn’t compromise anywhere and it is the first time in my life I think I’ve made an album with a band that feels and sounds like it’s supposed to.”

Thematically, HOLY POPES serves as a reflection of where we are in the world, both emotionally and systemically. Outside of his duties with the band, Knight works with men to provide a space to discuss their place within a patriarchal system that inhibits their own emotional growth, whilst contributing to the mass violence we see against women on an hourly basis.

“In order to move away from misogyny and patriarchal violence against women, other men, and ourselves, we must confront it head on and sit with the discomfort it may bring,” says Knight. As such, his lyrics across the album move in and out of themes addressing patriarchy, capitalism, mental health, and Brexit, to name just a few. “Music is and always will be political,” he asserts, “and I think now more than ever, we collectively need to provide the soundtrack to a much-needed social upheaval and inspire a will to change, to stand up against oppression and express ourselves fully.”

The three-piece will be playing a special album release show in Bristol at The Golden Lion on 27th January 2023 in celebration.