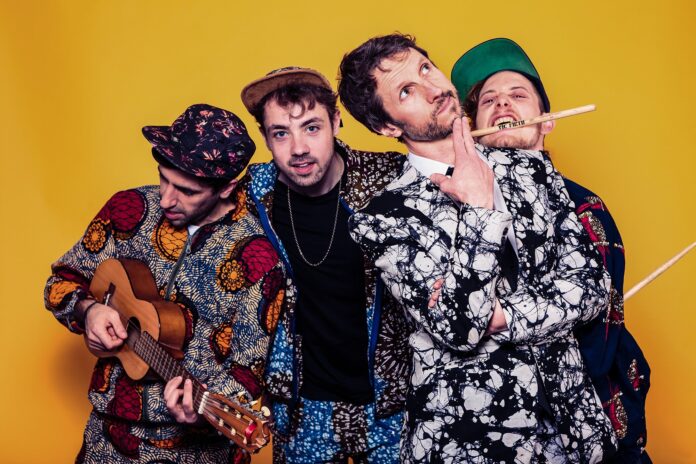 Hot off the back of a 20 date UK tour, THE UNDERCOVER HIPPY have released their first single since Fool Britannia in April 2020. The new track, THESE DAYS, is one of those instantly relatable tunes that gets people nodding not only in response to its infectious rhythms but also in recognition of the home truths contained in its lyrics. The theme of the song is neatly summed in the chorus: “You all know what I mean when I say / I don’t get out a lot, I don’t get out a lot these days”.

Originally written as a call to arms to anyone who’s given up partying as they’ve gotten older, the song found unexpected new meaning when lockdowns confined us all to our homes for legally enforced Netflix and Chill. This new aspect is represented brilliantly in the music video which the band produced with Yellow Boot Media in Manchester. The video includes a scene of Billy on a sofa in his dressing gown being gradually buried in pizza boxes and takeaway bags, as well as fantastic footage of the band dancing through the streets of the Northern Quarter.

“This was one of those songs that just came out of nowhere,” says Billy Rowan, the man behind The Undercover Hippy. “I was jamming some chords with my band, trying to find a new arrangement for a totally different song, and the first line ‘you all know what I mean when I say’ just came out of my mouth as I was improvising. Ironically at that stage, even I didn’t know what it was I was going to say, let alone everyone else! But a few hours later, after more scatting and improvising, the second line ‘I don’t get out a lot these days’ also just fell out, perfectly formed and unexpected. As soon as I sang it I

realised what the song would be about, and that I had stumbled upon a really relatable theme.

“This chorus then set the stage for the rest of the song to be slowly written around it. For the verses I drew from my own experience, reminiscing about my younger days of all night raves and parties. I also included a phone call with Jim, who is a messy party animal character from our song Mate Like That. Jim invites me to a party (involving naked people and jam), and that becomes the catalyst for me finally dragging myself out of the sofa and getting back out into the world. You’re only as young as you dare to pretend!”

THESE DAYS is the second single taken from the forthcoming album POOR LITTLE ENGLAND, which is scheduled for release in October this year.

Renowned for the electric atmosphere at their shows, Billy and his band have performed at some of the UK’s best festivals, including Glastonbury, Boomtown Fair, Green Man and The Secret Garden Party, as well as many European festivals. As the music clocks up over 11 million Spotify streams, the band have been clocking up motorway miles, touring relentlessly across the UK and Europe each year. Of course, Covid has been tough for the band, with their Spring 2020 tour for the release of the FOOL BRITANNIA single – one of their most highly charged, political songs – rescheduled three times before finally going ahead in Autumn 2021. But the comeback was worth the wait, with sold out shows across the country and rave reviews for their recent UK tour in April.