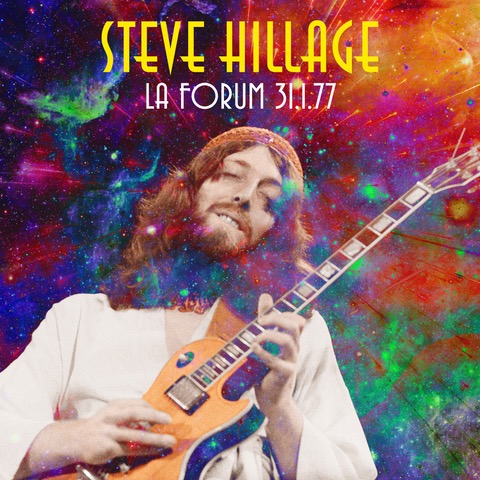 On 17th March 2023, Madfish will release Steve Hillage ‘LA Forum 31.1.77’, the latest addition to a string
of lovingly restored, previously unreleased live recordings from this pioneering musician’s archive.
Available on CD only, this live album captures the Steve Hillage Band in truly exceptional form.
Recorded at the LA Forum during the band’s early 1977 US tour with ELO, the set list features mostly
tracks from Steve’s cherished ‘L’ album including psych heavy, elongated covers of Donovan’s ‘Hurdy
Gurdy Man’ and the Beatles’ ‘It’s All Too Much’. With the addition of 3 bonus tracks taken from a later
show at the Rainbow Theatre, London, alongside a 16-page booklet with unseen photographs, the ‘LA
Forum 31.7.77’ release is a worthy addition to Steve Hillage’s notable solo catalogue.
Steve recalls, “Each of the LA shows had a full house of 15,000 people, most of whom were unfamiliar
with our music. We had only a quite short set time as support act, and with the band firing on all cylinders
and the excitement of playing to a large crowd, we were giving it a full power blast, which I think comes
over well on this recording. Apart from the first track, a really good version of ‘The Salmon Song’, the
set was all from the L album, and these early 1977 shows, and the final ones when we got back from
the USA in March, represent the peak time of the band we had put together the previous summer.”
STEVE HILLAGE LA FORUM 77
(Recorded Live at the The Forum, Inglewood, California 31st January 1977)