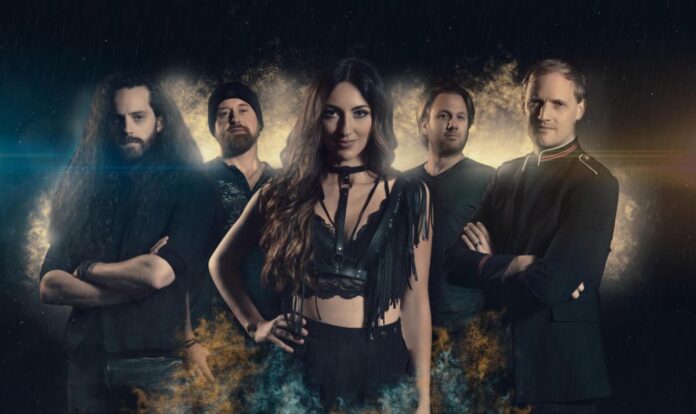 Like a phoenix from the flames, metal masters DELAIN have recently returned with a new line up, setting off into a new era. The multi-million streaming, leading outfit now set the stage for their eagerly awaited next studio album, Dark Waters, set for release on February 10th, 2023 via Napalm Records.

Emerging as a brand new start and safe haven alike, Dark Waters, without any doubt, continues the legacy of the brainchild of keyboardist, founder and main songwriter Martijn Westerholt and contains everything DELAIN is loved for and more. The album is a sonic rollercoaster ride of catchy tunes with explosive elements, ranging from pop to film score-inspired to blistering, room-shakin’ metal – and even with a special guest or two.

Brand new single “Beneath” perfectly showcases the incredible talent and musical sophistication of new vocalist Diana Leah. The track also boasts guest singer Paolo Ribaldini. Along with a stunning music video, “Beneath” takes the listener into a sinister underworld of the deep. Modern, synth melodies mix with hook-filled classical passages and ominous riffs throughout the song.

Martijn Westerholt comments, “’Beneath’ is a perfect ambassador of the album and DELAIN as a whole because it encapsulates almost all of the recognisable DELAIN elements you will find on the album!”

Watch the official music video for “Beneath” here or by clicking the thumbnail below.

Songs like the previously shared, standalone new single “The Quest and The Curse” as well as “The Cold” (the latter featuring an epic choir), lure with a bombastic sound that skilfully combines orchestral melodies, crushingly heavy riffs, and soaring vocal performances. DELAIN never loses touch with their characteristic sound, celebrating consistency without stagnation. Pop-infused opening track “Hideaway Paradise” shows exactly that, inducing a dream-like feeling that flirts with melodic metal guitars, while the ballad-like dark earworm “Mirror Of Night”, guest features none other than Within Temptation guitarist Ruud Jolie. “Queen of Shadow” merges the orchestral and synth-focused soundscapes DELAIN is known for. “Tainted Hearts” is centred around Westerholt‘s keyboard arrangements, skilfully showcasing the creative roots of the group’s mastermind. “Invictus” is nothing less than the Magnum Opus of the album – a rock opera in its own right with heavy riffs, choirs, and vocal parts performed by Diana Leah, Paolo Ribaldini, and Marko Hietala (ex-Nightwish), closing with a unified, jaw-dropping climax.

The talented group return to the UK for live shows in April 2023, performing the following two dates: