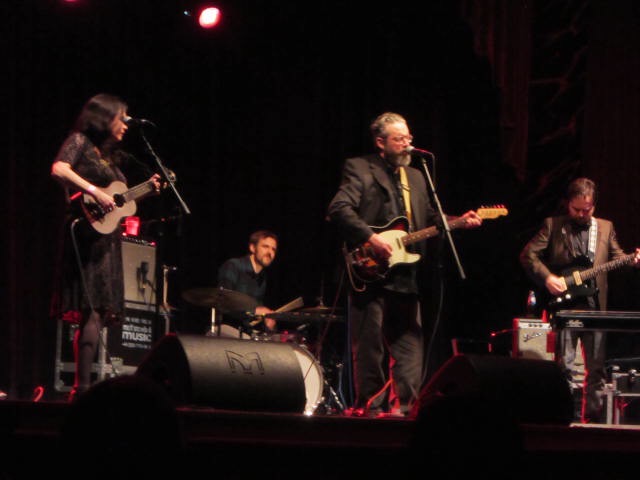 From tiny horses to giant five year olds, by way of radioactive waste. Just another night with The Handsome Family

Enigmatic souls they might be (their Facebook page lists the band members as “it depends”, the same for their hometown, and suggests that “William The Conqueror are “not what you might expect”) but the three who tonight make up the band tonight, are excellent at what they do. “I Missed A Trick”, about growing up too fast, is a fine piece of songwriting and elsewhere “Sensitive Side” is explores a more bluesy element. Frontman Ruarrari Joseph has a laid back style, but that hides a darker side to the music, you suspect, and the good-time vibes of “Thank Me Later” add a country rock stomp to things. A fine way to start the evening and a band that deserve to garner plenty of attention as their debut LP is out later this year.

Genuinely original songwriting is a rare commodity these days. Yet over 10 albums and now with a career stretching to nearly a quarter of a century, The Handsome Family have done it their way.

Musically, it might be pretty conventional – a dash of country, a pinch of bluegrass and a whole heap of murder ballads – but the lyrics of one half of the husband and wife team that the band is centered around, Rennie Sparks, are anything but.

This extends to her stage patter too, with her one-of-a-kind way of introducing songs like “So Much Wine” (“smashing bottles against the wall is the only way to end the night”) and “Bottomless Hole” (“we are from New Mexico, its every residents duty to take some radioactive waste into their garden”) take the songs into a different realm completely from their peers.

Then there’s husband Brett’s deep voice, which is perfect for these dark songs. He protests that he doesn’t look Colonel Sanders from the KFC box (he does) but he delivers the music in a way that is better than tasty. “No One Fell Asleep Alone” packs more into three minutes than it has any right to and “The Loneliness Of Magnets” should be too barmy to work, but does.

It is interesting that those that try to be quirky end up looking rather daft, but those who naturally look at life a little differently always end up making sense. So is that “Tiny Tina” – about the worlds smallest horse on show at a State Fair – sits perfectly alongside “Your Great Journey”, dedicated to Robert Fisher of Willard Grant Conspiracy, who recently passed away, and “Far From Any Road” – the theme tune to True Detective’s first (and best) season – with no problems whatsoever.

They do one conventional thing. There’s an encore. Brett isn’t happy at the ritual of it, but there it is, and “The Giant Of Illinois” as appropriately big, before “Frogs” from the album they released late last year ends things.

Many bands talk about being unique. Few are. This one is. There’s no one that sounds quite like The Handsome Family, and no one goes about it in the way do. Tonight proved that.