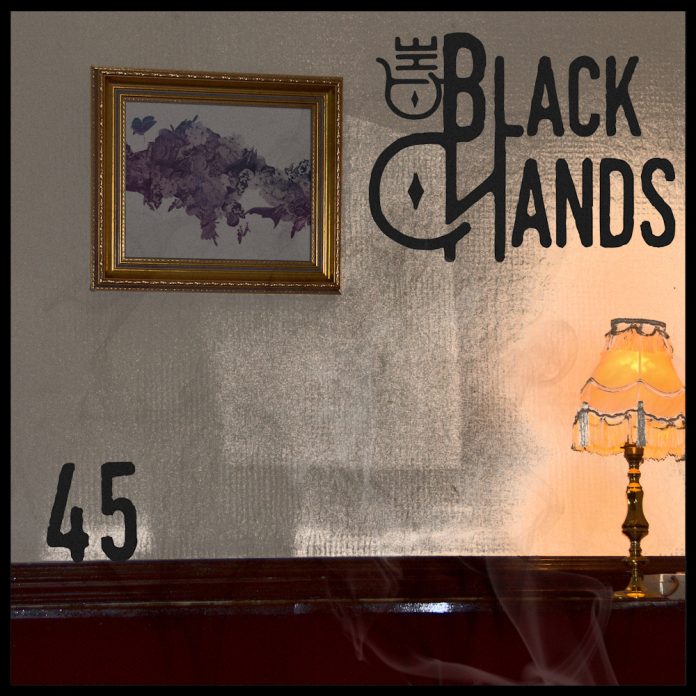 The Black Hands release a brand new single and video – 45 on Fri 23 November 2018, as they prepare for the release of their long-awaited debut album. 45 is the third song to be taken from their forthcoming debut, planned for release early in 2019. It will be available via all major download and streaming outlets. 45 is accompanied by a video shot on the streets of Derby, England. It features a rogue-ish yet charming performance by Andrew “Pange” Jones.

The Black Hands are a rootsy rock/blues outfit from Chesterfield, England, in the mould of Free, Cream and more recently Rival Sons and The Temperance Movement. Throw in some Deep South influences from yesteryear and you will start to picture where The Black Hands are coming from. The band have actually been around since 2010 but have been ‘derailed by life’. A mixture of marriage, births and unfortunately bereavement all colluded at the wrong times to hinder the obvious talent on offer. Now they are back with a bang and ready to fulfil all the early promise that garnered much breakthrough recognition. Singer, Andy Gannon said: “The song is inspired by Dirty Harry from the movies about a maverick cop played by Clint Eastwood, we then took a bit of creative license around it. Riley came up with the core riff and lyrics but it has evolved over time to become what it is today. We actually recorded it on an 8-track in our own studios, we introduced a slide guitar and added some heavy distortion to some of the vocals to emulate that original blues vibe.” LIVE DatesFri 23 Nov – Rock City Basement, Nottingham w/ SkamSat 24 Nov – The Horse Shoes, Clay CrossSat 01 Dec – Winter Rocks, Corporation, SheffieldSat 15 Dec – The Roebuck, ForsbrookFri 28 Dec – Twenty Ten, Matlock  The Black Hands are:Andy Gannon (vocals/harp)Daniel Riley (guitars)Joe Hayes (bass/keys)Ben Atkins (drums) Links: http://www.theblackhands.com/  https://www.facebook.com/theblackhandsmusic/https://twitter.com/theblackhandshttps://www.youtube.com/channel/UCyNLyKCLXUUWHUMz8At1_Sghttps://www.instagram.com/theblackhandsmusic/https://open.spotify.com/artist/5cU0q8pfCq1BcYkIM7xLHl?si=0b_kV-xCTg6RF98gVv3Yxg