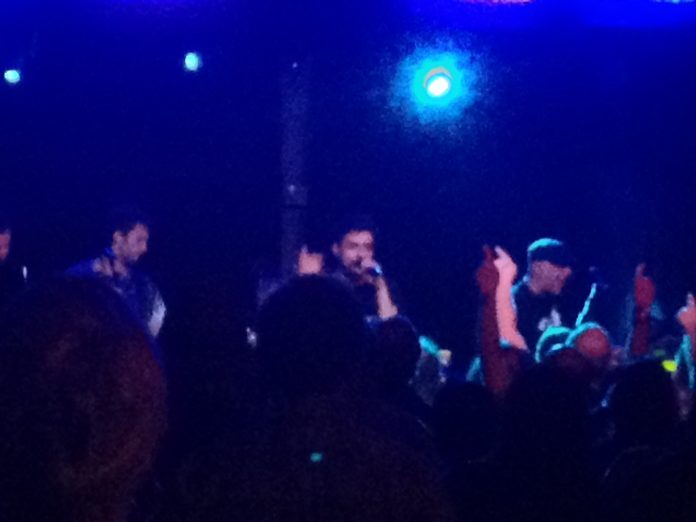 Local lads Liberty Lies are a formidable bunch. They’ve proved that throughout many of these type of gigs over the years. They are also accomplished and polished live performers, songs like “Something Else” are the envy of many bands who headline this room, never mind ones who are beginning the evening. The sound mix doesn’t help them initially, but the quality of work such as “Undivided” is such that it wouldn’t matter if they were playing it in the next room. That song, like “Circles,” is from the stellar “Fracture” EP, which emerged earlier this year – and whose title track closes the set – but “Russian Dolls” from their debut betrays the fact they could always write songs. A seasoned and very fine band, that vital experience could yet propel Liberty Lies forward. And that, you’d best believe, is the truth.

“We are playing a really short set tonight” says Vukovi singer Janine. “But I’ve promised Gun we’ll get you warmed up.” The Ayrshire mob then proceed to do just that. Songs like “Schwagger” – which doesn’t really do that, but doesn’t have problem strutting – have got them rave reviews in the pages of Kerrang and they do have right type of modern angular rock chops to back that up. When Janine said it wasn’t to be a long show she’s not wrong and they seem to come and go in a flash. The band do save the best for last and current single “Boy George” adds a confident groove. Vukovi could have what it takes to make it.

Another Scottish band made it back in the 1980s. They are headlining tonight. In 1989 when they released their debut “Taking On The World,” Gun were a seriously big deal to MV and many more besides.

As we said when saw them at The Slade Rooms in Wolverhampton earlier this year it seems that this – their third go around the rock block – is serious. They have had a change of singer or two, but now Dante Gizzi (their former bass player) is now frontman, but in amongst it all they are essentially the same type of band.

The set has changed a touch from a few months ago. “Let It Shine” still opens things, but “Word Up” is next and yeah, the sucker DJ’s still think they’re fly and all is pretty good in the hood, thanks very much.

That Cameo cover might have been their big hit and it might have been – bloody hell, it remains – great fun, but Gun knew their way around a pop rock song as well as any of their peers. Case in point is “Don’t Say it’s Over” – tossed in with glee after “….Up”. It is 21 years old and still sounds superb, and if it’s been said that “Better Days” is the best song that Bon Jovi never wrote (and its probably been said on this site to be fair) then that doesn’t mean it’s not true.

Tonight is the first night of the second leg of their “Frantic” tour and the pick of the songs on the new record, “One Wrong Turn,” belongs in the upper echelons of Gun’s catalogue.

As they are largely preaching to the long converted here, the reinvigorated band feel confident enough to occasionally eschew the hits in favour of album tracks and the Simple Minds-ish “Something To Believe In” is enthusiastically received, as is the huge title track from that debut.

As befits a man who’s pretty chuffed he was able to buy a “big bowl of bananas for a pound” in Birmingham Market earlier today, Gizzi launches into “Money (Everybody Loves Her)” with abandon and if the new records turbo charged new single “Labour Of Life” adds a stomping pop sheen to things, it’s a diversion all seem to enjoy.

The thing that shines through tonight is just how good Gun’s older material was (and is) “Inside Out” is the work of band that perhaps never got their due. “Steal Your Fire” which ends things, on the other hand, is the sound of a band that doesn’t care and will have a great time anyway.

They encore with their new charity single “Everyone’s A Winner” and at least the rocked up version of Hot Chocolate helps the amazing cause of Marie Curie. And anyway, given that they finish with “Shame On You” they have one more stone cold classic of their own up their sleeves.

In the band introductions the only other original member of the band, guitarist Gules Gizzi, introduces his brother and says: “He’s always being compared to [original singer] Mark Rankin. Mark was great, but this is Gun. Now”