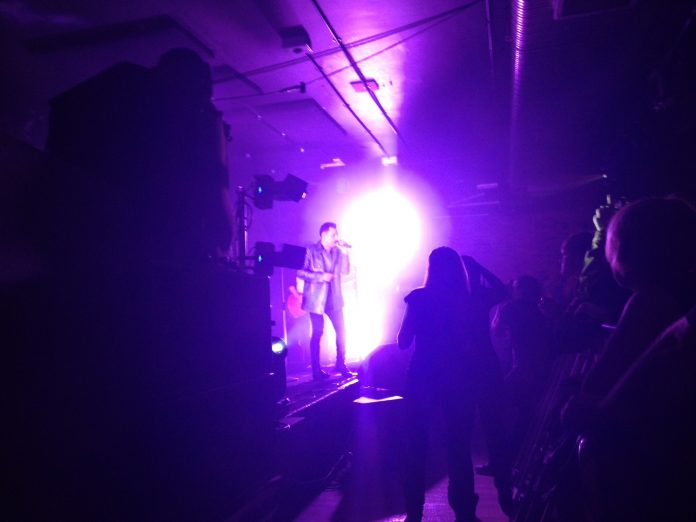 Word up people. Don’t say it’s over. Gun are back.

Home Counties hard rockers The Wild Lies are an impressive bunch. Full to the brim of something that is best described as the youthfully unshakable belief that one day they’ll play Wembley, WL set about winning the sizeable crowd one by one. Singer Matt James in particular is on a mission to make friends with everyone here, it seems. “Relive The Ride” swaggers, “Falling” grooves and the whole thing set is brimming with hooks. Let’s be honest, if your dad is the guitarist in the best band on the damn planet (bassist Dylan is Adrian Smith’s offspring) being in a rock group takes balls. The Wild Lies deserve credit both for not playing the Maiden card and being bloody good in their own right. Closing number “Magpie” rather neatly flies. Watch them go.

Confession time. When this writer was 14 years old in 1989 posters from Kerrang! festooned the walls of his bedroom. There were millions of the things, and in amongst them was one of Scottish rockers Gun. Their superb “Taking On The World” debut gave them the “boys most likely tag” and their cover of “Word Up” made them stars.

Then, after a few more albums, rather abruptly, they stopped.

Even this 2015 shindig is a second comeback. The first, with the “Popkiller” EP and with Toby Jepson on vocals, saw them open for Lynyrd Skynyrd and trek round the UK on their own. Now, it’s the “Frantic” record – just released – that brings them back. There’s been a line up change too, Jepson is out and Dante Gizzi has moved from bass to stage front.

Which brings us up to date and to a spring Wednesday night in Wolverhampton. The band take the stage to “Let It Shine” from the new record, which after a gospel tinged opening is transformed into a Gun stomper of yore.

The thing is, as Gun know, playing live at this stage of their careers is a tricky manoeuvre. The crowd in the main, is of a vintage such that they’d quite like some old stuff, thank you, but the band doesn’t want to be a nostalgia act. The set tonight gets the balance just right.

So it is that the quite brilliant “Don’t Say It’s Over” is ushered straight in and still sounds absolutely timeless, this is followed up with something of a classic the debut album and just like the late 1980s we are all belting out the fact that we’d “die for better days.” The song sounds simultaneously just like the best thing Bon Jovi never wrote and way better than anything JBJ and his mates have put their name to in a decade.

Whilst there hasn’t been enough time to grow to love the new songs in quite such a manner, one of “Frantic’s” obvious high point “One Wrong Turn” immediately fits into this company and even if you don’t like that one (we do) there’s an oldie coming in a minute. It’s that type of night.

“Money (Everybody Loves Her)” slams, newbie “Hold Your Head Up” is basically a big chorus with a verse or two in for a spot of filler, while the criminally underrated “Gallus” album is represented for the first time by “Welcome To The Real World” and the ballad “Higher Ground.”

Gordon the guitar tech turns up for some acoustic strumming on the new album’s title track, which is followed  for the debut album’s one, sung by the audience, if you please.

Before the end we wave our hands in the air like we just don’t care as that cover of that Cameo song we-all-liked-anyway-but-a-rock-band-made-it-ok, is played, and if the main set closer “Steal Your Fire” showcases a fine piece of rock n roll, the charged up encore does likewise.

It starts with the glam blast of the T Rex-ish “Labour Of Life” – the first single from “Frantic” –  and ends with the glorious “Shame On You” and the Kerrang! buying 14 year old in all of us is reawakened, if just for a little while.

Dante – who along with his brother Jools has piloted this thing for not a kick in the arse off three decades –  probably knows what he’s talking about when he says mid-set: “it’s been a blast playing the new songs and to be doing this again. This is Gun now.

And if we may stretch a firearms metaphor to breaking point, even if they are aren’t taking on the world anymore, “Gun now” are bang on target.