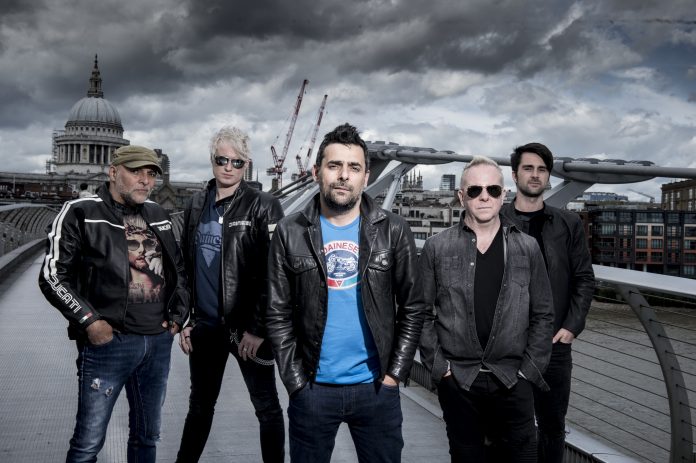 Taken from the Japanese edition of ‘Favourite Pleasures’ and live album ‘Live At King Tut’s’, Glasgow’s unstoppable force of hard rock, GUN have confirmed a new single due 2nd April, ‘Whiskey and a Prayer‘. The band have also confirmed an extensive run of UK tour dates for November and December 2021.

The MTV EMA award winning outfit’s rebellious attitude and freeing sound has seen GUN release a string of albums attracting an array of new fans, and impressing critics alike. Their efforts have earned them the title as one of modern rock’s greatest influences and secured them achieved 3 UK Top 20 albums and 11 UK Top 40 singles throughout their career; most notably touring with The Rolling Stones on their Steel Wheels & Urban Jungle tours.

Unheard in the UK, the thunderous and fierce new single ‘Whiskey and a Prayer’ is taken from the Japanese edition of the band’s ‘Favourite Pleasures’ album; the track grabs the listener from the off, as they are soon thrown into a whirlwind of unstoppable guitar licks and venomous drum patterns, as Gizzi champions determination and an unwillingness to give up. The release signals a new era for the group, as they prepare for the release of the eighth studio album, which is currently being planned for a November release.

Watch a message from Jools and Dante from the band HERE.

To follow their riotous single, the group have also announced a run of UK tour dates that will take place across November and December of 2021. With iconic venues such as London’s Islington Assembly Rooms and Newcastle’s Cluny on the list, GUN’s unstoppable sound feels like the perfect way to welcome the return of live music, while experiencing the bands tracks, new and old, in their incomparable full glory.

Sharing the bands excitement toward the upcoming dates, GUN’s Jools says: “Hey Gunnetts and Gunners – Some great news at last! We can‘t wait to get back out on road, it‘s been a long time coming. It‘s been over a year since we toured since this shit COVID thing happened, so let‘s put that to bed and start the party!”

For tickets and further information: https://www.gunofficial.co.uk