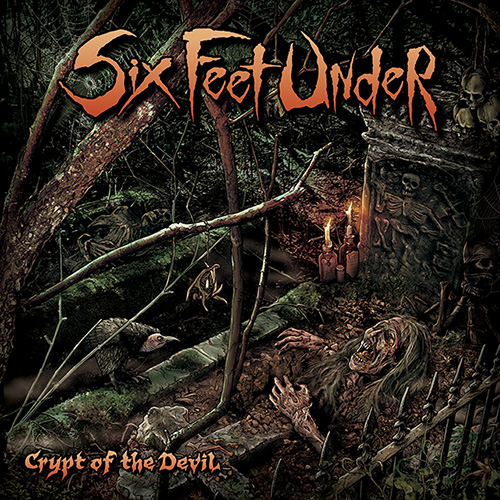 In just a few days, iconic death metal giants, SIX FEET UNDER, will unleash the bestial wares of their Crypt Of The Devil full-length via Metal Blade Records. Composed by renowned growl king, Chris Barnes with Cannabis Corpse bassist/vocalist Phil “Landphil” Hall, the band’s eleventh studio recording boasts ten brutalic slabs of audio repugnance and, as a continuation from SIX FEET UNDER‘s previous works of deviltry, wherein Barnes pens lyrics from the darkest depths of the human condition, is chilling in both sound and concept.

As Crypt Of The Devil‘s release day draws near, today No Clean Singing rolls out “Gruesome” for communal huffing noting, “I’m not saying you shouldn’t blaze one before listening to ‘Gruesome,’ as long as you understand the risk of warfare in your brain chemistry – between the part of you that wants to sink into a couch and dial out for a pizza and the part, awakened by this song, that wants to skin your obnoxious neighbor with a lemon peeler and then set him on fire before he bleeds out. Barnes sounds like he’s feeling the heat of the blood lust,” the popular video portal continues of the track, “the jabbing/drilling riffs are scalpel-sharp and vicious, and there’s enough crowbar-to-the-neck groove in the song to plow through the cranium and get stuck in the squishy part. When the band really jam the pedal to the floor in this thing and let loose a flame-throwing guitar solo, it becomes Grade-A mosh meat, too – the song is bound to become a staple in SFU’s live shows.”

Get “Gruesome” at THIS LOCATION.

And you can still sample “Stab,” still slicing its way through the Decibel airwaves at THIS LOCATION.

SIX FEET UNDER began as a side project while Barnes – owner of what would become one of the most dominating, groundbreaking and instantly distinguishable voices of the death metal genre – was fronting Cannibal Corpse. SIX FEET UNDER would eventually become a full-fledged entity in 1995 and now stands among the longest standing and successful acts in death metal history, with all but their debut appearing on a Billboard chart. Latest offering, Crypt Of The Devil, was recorded at Phil “Landphil” Hall’s studio in Virginia. Hall tracked rhythm and bass guitar, while his brother, Josh, tracked drums, and guitarist Brandon Ellis tracked the majority of the album’s leads. Barnes took to London Bridge Studio (Pearl Jam, Alice In Chains etc.) in his new homebase in Seattle, Washington to track vocals and in fact holed himself up in the very same booth where Layne Staley captured his words. Mixing was completed by Rob Caldwell (Cannabis Corpse, Iron Reagan etc.) in Sarasota, Florida and mastering was handled by Alan Douches (Cannibal Corpse, Revocation, Torche, Skeletonwitch etc.) at West West Side in New Windsor, New York.