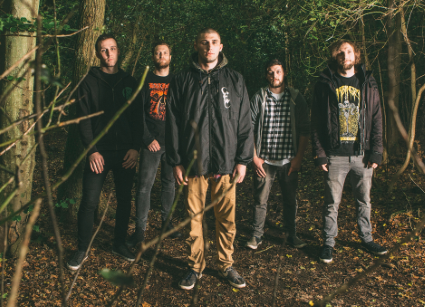 Winners of Bloodstock’s ‘Metal 2 The Masses’ (Corby finals) and seen live at the prestigious festival in 2015 on the ‘New Blood’ stage, Northampton modern metal band ‘From Eden To Exile’ have announced they’ll release their debut album ‘Modern Disdain’ on 2nd June, via Attic Records / PHD.
Listen to lead single ‘Volatile’ and you’ll discover the perfect gateway to ‘Modern Disdain’:
Recorded and produced by Neil Hudson (Krysthla/Gutworm) at Initiate Audio and Media Studios in Wellingborough Northamptonshire, From Eden To Exile’s debut album wastes no time in grabbing the listener by the throat and showcasing impressive song crafting that points to a young band with an abundance of potential ahead of them.

“It’s been an extraordinary time”, says vocalist Matt Dyne, “we’ve taken our time and sweated bullets nailing this album to the point where everyone in the band can honestly look each other in the eye and confidentially state this is the best of us, right now.” “Yet there’s much more in the tank”, continues guitarist Tom Kelland, “Working with Neil at Initiate really opened our minds as to the possibilities with our music. The boxes we may have felt confined to in the past have been stripped away and we firmly believe we’ve got something really solid to offer the metal community.”

Producer Neil Hudson was quick to spot the potential of the group and took them under his wing, providing not just his skills as a producer, but also mentoring the group, thanks to his own experiences as a member in successful metal acts Gutworm and Krysthla. “From Eden To Exile are going to make serious waves with this album. Make no mistake. From start to finish it’s an absolute monster!”, states Hudson.