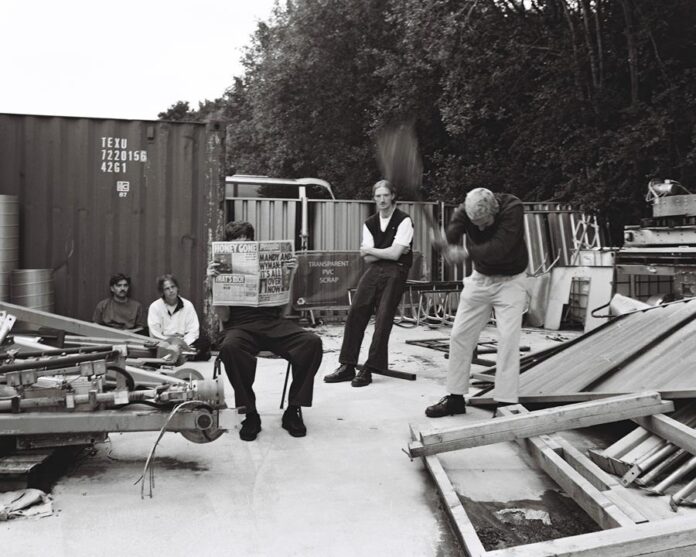 At the start of the summer So Young Records – whose recent releases have included Vlure, Been Stellar and Lime Garden among others – announced the signing of Humour, a Glaswegian group still in their relative infancy, but one who arrived musically fully-formed, pairing together fragments of off-kilter post-punk, erratic indie-pop and discordant post-hardcore, delivering a sound that is at once disorientating and immediate. Early shows in support of Do Nothing, Folly Group and DEADLETTER have already marked them out as a must see live band, propelled by the unhinged lyrical energy of front man Andreas Christodoulidis.

Already heralded at both press and radio for their singles so far “yeah, mud!”, “alive and well” and title track “pure misery”, their six-track debut EP is a much-anticipated release coming later this month on November 25th (pre-order the record direct from So Young here).

Ahead of that the band today share the EP’s epic closer, the visceral and foreboding “good boys remember well”, a track that brings to the forefront the early post-hardcore influences within the band, another marker that Humour reside in noticeably different lanes from their peers.

The band had the following to say about the latest single:

“This song’s about a really tragic submarine disaster Andreas heard about one day.  He just lifts a bunch of particularly sad lines from Wikipedia about it rather than adding too much of his own perspective. I’ve always thought this was a cool thing about this song.  It seems like he’s got a megaphone and is just sort of relentlessly listing facts and figures about the disaster in a desperate attempt to make you feel the way he did when he heard about it.”

Humour live together in Glasgow and formed across the 2021 lockdowns, writing and recording their material at home, with the music intended as a backdrop to Andreas’ lyrics. Sometimes they’re about letting people down, sometimes they’re about pets dying, sometimes they’re about trying to say something when you don’t have anything worth saying. They’re usually just trying to paint a picture, with Andreas drawing sketches to go along with each of their songs, including the EP cover, and the artwork and visuals behind the lyric videos for both “yeah, mud!” and “alive and well”.

They hope that each song looks the way that it sounds.

The band have announced a string of further dates in support of their debut EP, including launch shows in both Glasgow and Edinburgh close to release and two live in-stores and signings at Assai in Dundee and Edinburgh: