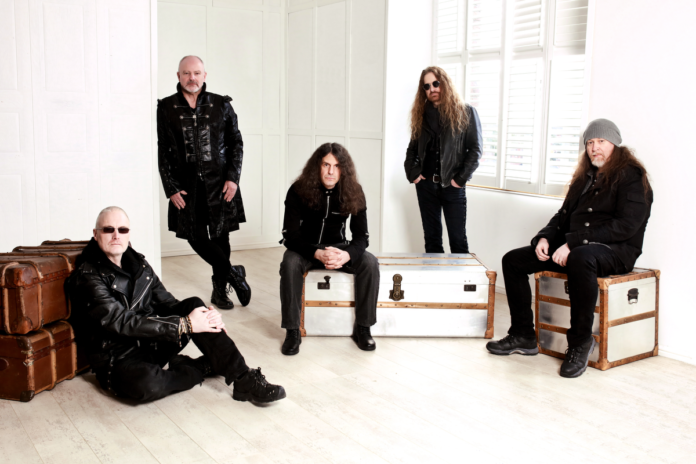 UK hard rock stalwarts TEN used the downtime during the worldwide pandemic to work on two new albums, with the first of these (‘Here Be Monsters’) issued in early 2022 via Frontiers. The second, ‘Something Wicked This Way Comes’, will be released on 20th January 2023, with a first single and video from it for the song ‘The Tidal Wave’ available from today.

Following the success of their recent string of albums from 2014’s ‘Albion’ to ‘Illuminati’ four years later, TEN mainman Gary Hughes was joined once again by guitarists Dann Rosingana and Steve Grocott, bassist Steve McKenna, keyboard maestro Darrel Treece-Birch and guest drummer Markus Kullman (Sinner, Glenn Hughes, Voodoo Circle) for the recording of ‘Something Wicked This Way Comes’. Continuing to raise the musical bar higher for themselves, stunning guitar work, rich keyboards and nifty rhythm section interplay alongside the rich voice of Hughes are once again the order of the day.

‘Something Wicked This Way Comes’ is produced by Hughes, with mixing and mastering by Dennis Ward, with whom the band have had a professional association since he worked on their ‘Stormwarning’ album over a decade ago.

Fans should note that there are no ties between this new record and its immediate predecessor, with the band simply crafting two high quality releases and deciding to issue them separately, in a similar fashion to their first two records back in 1996.

Built around singer and songwriter Hughes, TEN have a revered back catalogue, initially finding an audience by playing a brand of melodic hard rock influenced by giants of the genre such as UFO, Thin Lizzy, Magnum, Giant and Whitesnake at a time when this may have been considered commericial suicide. Early albums such as ‘The Name Of The Rose’, ‘The Robe’, ‘Spellbound’ and ‘Babylon’ subsequently established them as mainstays of the scene, which has been maintained until now and the eve of their 16th studio album.