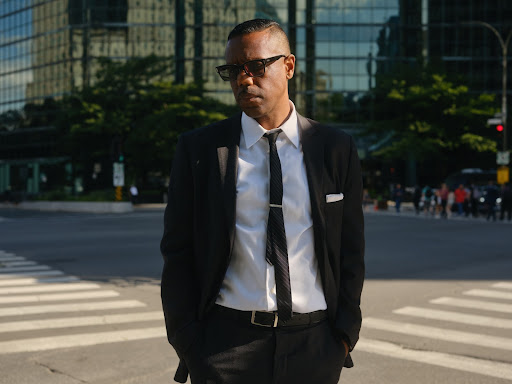 Murray A. Lightburn, the longtime frontman of Montreal’s acclaimed The Dears, returns today with a deeply personal new single “Dumpster Gold,” to announce his third solo full-length album, Once Upon A Time In Montreal, for a March 31 release via Dangerbird Records.

The album, which Lightburn jokes is an audio version of a biopic, was inspired by the passing of his father, a jazz musician from Belize who moved to Montreal via New York to reconnect with his teenage sweetheart. The two were married for 56 years, until he passed in April 2020 in a Quebec nursing home where he’d been living with Alzheimer’s. Lightburn shared a video for the single earlier today via RANGE.

Discussing “Dumpster Gold”, Lightburn notes, “About a year or so after my old man passed, my mom called and said, ‘Murray, I’ve made a big decision: I’m selling the house’. She’d been there for 50 years. We were the only family that ever lived in it, one of many identical houses in a section of Brossard, Quebec. On our way out, we sifted through everything; most of it was going to the dump. There were many worthless treasures that were meaningful only to us. A couple of things now sit around my house. My father wasn’t an expressive man to me. I am left with these fragments to piece together a connection to him.”

Despite growing up with the man, Lightburn—the youngest brother of three—says his father “was almost a complete stranger to me. I could almost count the conversations we had, and none of them were very meaningful. I had to deduce that our happy moments were listening to Expos games together. I never knew how he felt about my career or the things I’d achieved—all of which I got from him.”

Lightburn’s father was a saxophonist who worshipped Coltrane. There’s no hard bop on Once Upon A Time in Montreal, but it does feature an array of Montreal jazz players. Like this album’s predecessor, 2019’s Hear Me Out, Lightburn is in full crooner mode, distilling the passion and intensity of The Dears into gentle arrangements that feature an orchestral section, drawing on late-’60s, early-’70s folk/jazz/pop: Dionne Warwick, Nick Drake, Bill Withers, Serge Gainsbourg, Al Green, etc. While the influences might be obvious, the end result is singular and without peer.

After the patriarch passed, Murray’s 86-year-old mother started revealing tender details of their life together. “She painted a portrait of a man that I had never met in my life,” says the songwriter. “I then pieced the story together.” He didn’t yet know he was writing a narrative album. The first batch of songs were written as part of the grieving process—keeping busy, in the way that is most natural for a songwriter with an internationally acclaimed 25-year career. Some other projects intervened—including the original soundtrack for I Like Movies, which debuted to raves at the 2022 Toronto International Film Festival and will arrive in theaters this March—before Lightburn doubled down and finished.

Once Upon A Time In Montreal was produced by Howard Bilerman (Leonard Cohen, The Weather Station, Godspeed You! Black Emperor), who Lightburn worked with on Hear Me Out. The album features Dears drummer Jeff Luciani along with a number of talented, local jazz players, including Frank Lozano, who delivers a soaring sax solo on the title track, which for Murray conjured the ghost of his father, who—after abandoning music when he became a born-again Christian—had picked up his sax again in the 2000s to play on two Dears songs. As soon as Lozano finished, “I knew it was a 400-foot home run,” says Lightburn. “I knew it was something that would hold. I knew also at that moment how much my dad would love this record. Even if he never told me, I know that it would be on repeat in his car if he was still with us and driving around. That was my motivation—to make something I know he would love. It’s not indie rock, you know?”

Murray A. Lightburn will hit the road next month in the UK and Ireland supporting Stars, kicking off February 3 in Galway and running through February 18 [all dates below].

Previous article
ONE, LOUDER
Next article
BOUNCING ABOUT