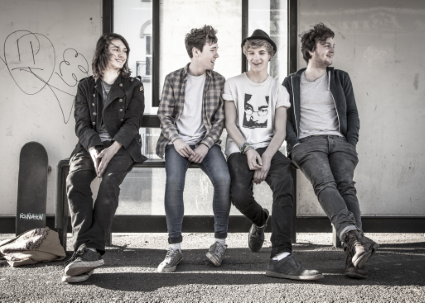 With a glut of influences stemming from The Clash and Arctic Monkeys, through to Royal Blood and even Nirvana, Delicate Holly set loose a barrage of killer hooks, spikey rhythms and alluring guitar works that will infectiously burrow through your cranium. Delicate Holly are primed to release their own stamp of Rock ‘N Roll to the masses this Summer.

Delicate Holly were born in Cheltenham in 2013, but the seeds of the band were sown back in school when Reuben Lovett (Bass and Lead Vocals), Alec Hopkins (Guitar and Backing Vocals) and Dougie Stokes (Guitar and Backing Vocals) started to jam together, hashing out covers. When they met Toby Jones (Drums), the foursome soon solidified and began to sculpt a full length live set. The band swiftly went on to establish themselves in their local scene through concrete gigging and a string of engaging performances. The quartet have also played several festivals and sold-out shows throughout the Gloucester area, and have successfully supported the likes of The Subways and Coasts.

In 2015, Delicate Holly signed with hip indie imprint ‘Paper Label Records’. The band now deliver their debut EP, ‘Love • Hate • Control’, which is due for release this August. The record boots off with ‘Full Body Cast’, flaunting an infectious indie rock shuffle with a tight, edgy sound that perfectly complements front man Reuben’s powerful vocals. Next up is the hugely melodic and undeniably contagious ‘Jaws’, soon followed by the punk-infused vigour of ‘Rain-O-Rack’, which rattles your ears with blistering force. The EP then signs off with the epic ‘Lemon Man’; the cut takes you on a musical journey that highlights the band’s maturity which far belies their years.