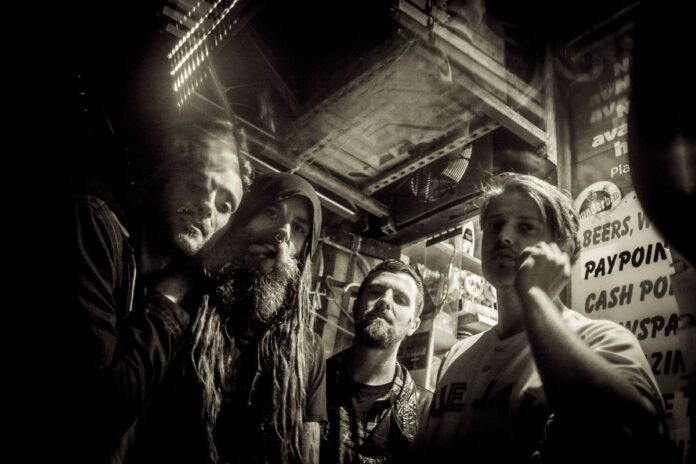 UK rock quartet InTechnicolour have revealed a video for their latest single ‘The Wave’. The track was released last week alongside the announcement of their new album Midnight Heavyweight, due for release on 4th November 2022 via Small Pond Records.

Check out the video for ‘The Wave’ here: https://youtu.be/-0V4D7cxnno

“The video is a kind of twisted, comedic, human-form adaptation of The Scorpion & The Frog parable. The story follows a parasitic character who persuades a stranger to carry him to his destination – and the subsequent events that unfold between them that day.

“It was important for the video to have this uncanny, deadpan tone. A lot of this came from the performance: we experimented a lot before shooting on what might be the most abnormal – and almost disturbing – method of carrying another human, which is present in most of the shots of the video. I wanted to capture the oddity of the actors in quite a composed and dispassionate manner. We were often shooting from afar on long lenses – with the actors performing amongst the public. Perhaps characteristic of South London, the sight of a man being dragged across the pavement caused no one to bat an eye. I love that.”

“The video for ‘The Wave’ tells its own little story about struggle and hardship and what it looks like when that struggle kills you…obviously we interpreted that in the most literal way we could, ‘cuz of the amount of THC floating ’round our wrinkly old veins.”

Hailing from Brighton, InTechnicolour are a riffy, groovy, rock band with a knack for creating a colourful song or two. Formed in 2015 through a want to play loud music through slightly broken amps, the basis of the band was created.

InTechnicolour are an inventive four-piece comprised of technically gifted musicians, cutting loose and playing music that’s about as far removed from their day jobs as it’s possible to get – and they are doing it better than a good portion of their contemporaries. Landing somewhere between the slack desert-groove of Kyuss and Karma To Burn, the band combine deeply satisfying riffs with a dynamic vocal style, which calls to mind the sounds of Baroness, Gojira and Mastodon.

InTechnicolour have previously toured across the UK and Europe with the likes of Physics House Band, Black Peaks, Town Portal, Bitch Falcon and Haggard Cat, and are gearing up to hit the road this autumn with dates to be announced very soon.