Getting To Grips To The Mechanics 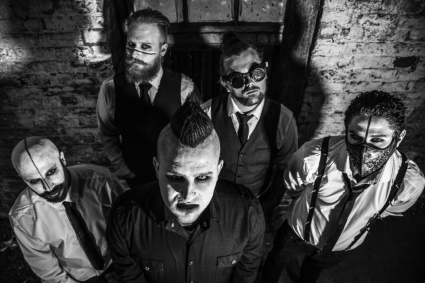 Boston, UK nu-metal band ANTI-CLONE have hit their Pledge Music campaign target (101% at this time) and to celebrate they have premiered a brand new lyric video ‘Mechanical Heart’:


The new song is taken from the band’s as yet to be released debut album ‘The Root Of Man’ – full details on the album release will be revealed shortly.

Working with acclaimed producer Matt Hyde (Slipknot ‘All Hope Is Gone’ Machine Head ‘The Blackening’) at Perry Vale Studio in London; Anti-Clone’s new album is set to be a BIG step up for the apocalyptic band.

“This debut album will be our first official footprint on the music industry. The EP was an early test, an experiment and we’ve learnt so much from the whole process. As soon as we started writing for the album earlier this year, we knew immediately we wanted Matt Hyde involved” said frontman Mr Clone.

“The step up in musicianship and song writing is immense” said Hyde“and as a producer you can’t ask for anymore than the band to be willing and open to trying new ideas. Anti-Clone pushes themselves and it’s no surprise that they have gained a lot of fans along the way. I can’t wait to have the record completed, there is no doubt in my mind that 2016 is going to be a big year for them.”

Big words to live up to? When you look at Matt Hyde’s work to date, which includes Slipknot, Machine Head, Bullet For My Valentine and Trivium, it’s a challenge but one Anti-Clone will relish and after listening to ‘Mechanical Heart’ there’s no doubt Anti-Clone have what it takes to make a real impact.

And Matt Hyde’s not the only one to see the potential in Anti-Clone.Skindred frontman Benji Webbe praises the band for their live shows“Anti-Clone have the full package! After having them support Skindred for 2 weeks, I saw them deliver an amazing performance night after night. I believe with the right direction they could be a ruling force in British metal!”

With the debut album artwork produced by the mysterious Mister-Sam, Anti-Clone are all set to be one of the UK’s breaking bands in 2016.

“Expect the unexpected” said the band “This album WILL be the birth of Anti-Clone.”

The debut album is set for release in 2016 (date tbc) via Pledge Music and PHD (Plastic Head Distribution).