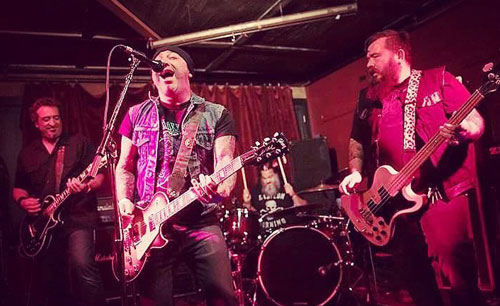 Launching hard into 2019, Ripple Music will re-release an acclaimed early album from one of the Ripple Family’s core bands, ZED.
The home of all things heavy and rockin’ will issue an all-new edition of the out-of-print and much-beloved Desperation Blues album in January as DESPERATION BLUES DELUXE, now accompanied by a special bonus 10-inch featuring a handful of ZED’s earliest demos.
To hype up the release, ZED has assembled a slideshow-on-steroids style video for the song ‘Skin + Bones.’  The video is like a light-speed visual retrospective of the band’s history, set to their particular brand of metal-tinged barroom rock ‘n roll, and it debuts today via Metal Injection at this location.
Discussing the deluxe album re-release with a clutch of rare early demos, the band says:
“This album rocks. Period. People really started taking notice when we self-released it back in the day, which is great because we had put our souls into writing, recording and getting the word out.  It was a completely DIY effort, and that’s a big part of who we are, coming from the underground punk/hardcore/metal scene, where if you wanted something done, you did it!  And to make this re-issue even better, we added the best songs from the demo that became our first album “The Invitation,” which was as DIY as it gets, recording in our rehearsal space with borrowed mics but still sounding great!  We are stoked that Ripple wanted to get this music out to a larger audience.  Its time to shine is now.”
On the song ‘Skin + Bones’ and its history spanning video, they add:
“We were looking back at pictures from shows and realized over half were pics of us with friends and fans, and we really wanted to make something that honors not just the spirit of the music, but also those who were part of our story along the way.  If you’re a ZED fan, you’re family, and we wanted the video to emphasize the amazing friendships and relationships we have made with people along the way.  The song itself embodies the classic “F-You” spirit that essentially epitomizes our old punk/hardcore roots.  Doing things our own way, living life how we want to, not worrying about what’s normal or accepted.  Sonically, we really try to capture that feeling with the big lumbering riffs and tense atmosphere, creating what we think is a feeling of defiance and self reliance.”
DESPERATION BLUES DELUXE lands January 18 from Ripple Music, and ZED will perform at the SX Stoner Jam in Austin in March.