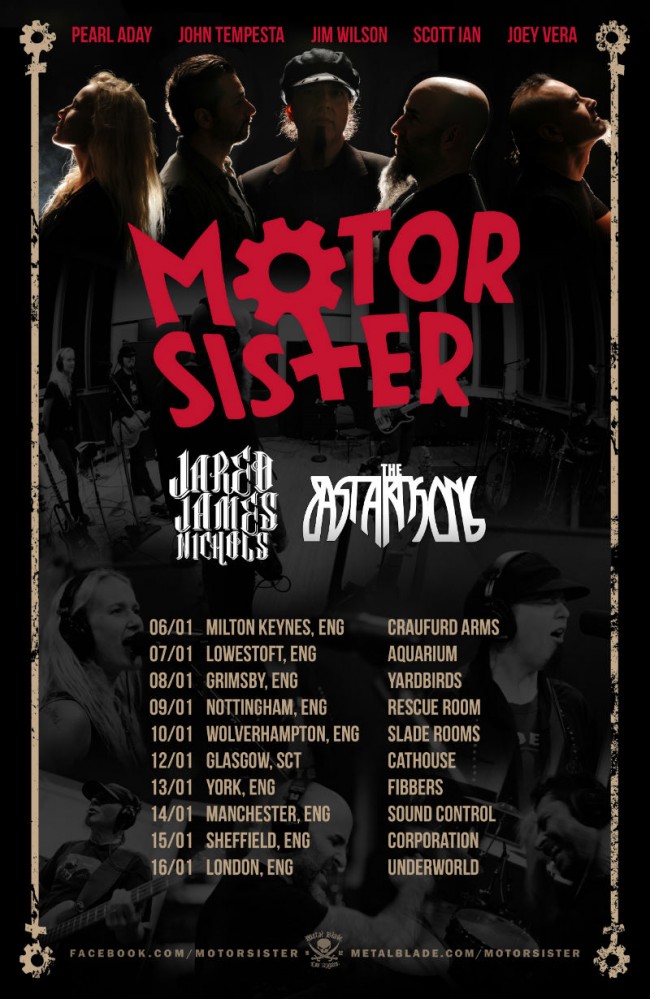 MOTOR SISTER who feature Mother Superior founder, guitarist, and vocalist Jim Wilson fronting the band, with Anthrax’s Scott Ian on guitar, Pearl Aday on backing vocals, Joey Vera on bass, and John Tempesta on drums have announced they will hit the UK for the first time ever in January 2016 to play ten in-your-face shows. And they can’t wait:

Jim Wilson – “Motor Sister in the UK! Get down and get with it!”

Scott Ian – “Motor Sister was born at a crazy party in the jam room at our house, just the five of us rocking our asses off. And now we get to bring that party to the UK!!! It’s a privilege my friends! See you soon.

Pearl Aday – “We love the UK. No better place to start bringing Motor Sister to the world. We’ll see you there, friends! Cheers, love, rock.”

See them up close here:

Support will come from JARED JAMES NICHOLS who recently release his debut album Old Glory And The Wild Revival and opening will be The Bastard Sons.

MOTOR SISTER was originally assembled to jam for Scott Ian’s fiftieth birthday party. Thanks to Scott’s wife Pearl Aday, who has been working on her solo career with Mother Superior front man Jim Wilson for years, all it took was a quick phone call and the stage was literally set for Scott’s dream gig.

Enthralled at the idea of making a record of his favorite Mother Superior songs, Ian emailed producer Jay Ruston (Anthrax, Steel Panther) and asked if he thought it was possible to recapture the same spontaneous energy MOTOR SISTER generated at their makeshift gig, and if an album could be recorded quickly.
Ride was released to great acclaim earlier this year on Metal Blade Records and debuted on the Billboard charts after its first week of release. The album cracked the top 10 with the #9 position on the Billboard New Artist (Heatseekers) chart.

Get the album now at http://www.metalblade.com/motorsister.