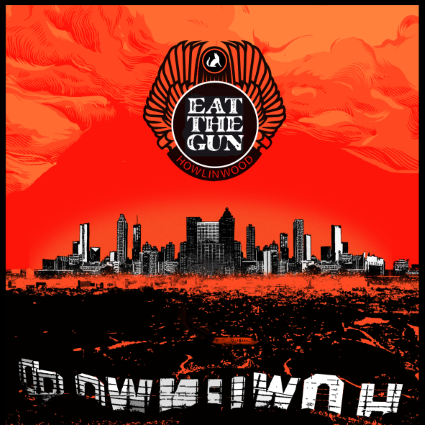 There’s been a very definite change in the type of music that’s emerging from Germany in recent years. Where once you could be fairly sure that their sounds would either be some kind of leather clad trad or over the top power metal, that is no longer the case.

Bands like Spitfire or Gloomball (both of whom have been featured on MVM and who share a label with Eat The Gun,) have taken those expectations and dismissed them in favour of a sort of classic hard rock underscored with a modern sound, and it’s from that kind of place that “Howlinwood” comes too.

Even allowing for that, though, the mid-paced “How Does It Feel?” Comes as something of a shock. An almost Linkin Park feel abounds here, and perhaps betrays the fact that Eat The Gun have looked across the pond before writing this record.

They walk this line a few times throughout the album. “Old Friend” – a catchy, countrified hard rocker – has echoes of (and shares a drum sound with) Shinedown, while “Unforgotten” brings with it a stark and dark industrial feel.

And yet, at its best, “Howlinwood” is an album that sees the shackles come off. The band have a rare ear for a crunching melody, and a rare ability to write a huge, big chorus. Beginning with the upbeat and uplifting title track is a master stroke. A pulsing insistence is shot through the thing, and it’s more than backed up by the brilliant “Falling” which is the best moment here by quite a way. When they get things as right as this then ETG are quite the force.

There are a couple of other moments which run “Falling” close. “Electric Life” – which features Tenacious D man John Konesky adding his talents, is a glammed up stomper and “Trouble Magnetic” is all handclaps and ebullience.

Theres time for another left turn before the end as the stripped back acoustics of “Anger” give us another string to Eat The Gun’s musical bow. But this is a band that you feel benefit from being absolutely bombastic and absolutely loud.

Whether Eat The Gun will see their fifth record allow them the chance for a breakthrough outside their homeland is unclear. More certain is this. When they stop being quite so clinical and go for just being a rock n roll band, things work much better for them.

They are veterans of 600 shows in Germany and these records might be fun to watch played live. On record it’s not bad at all, and just occasionally it’s exceptional.