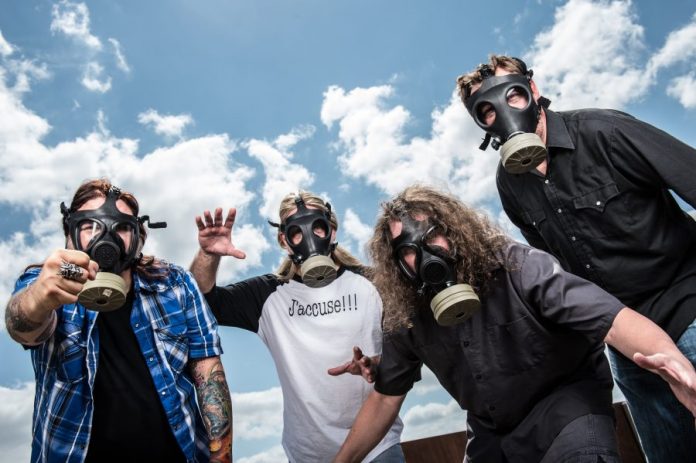 This will be the bands first album in almost 20 years, complete with the original line up. Ahead of the release the album, the band have made another new track available for fans to check out.

The sound of Next Joke is alternately heavy, whimsical, charging, and crunching, combining inescapable atmosphere with the drive of a band on a mission. Ben Huggins of Galactic Cowboys comments on the lyrics: “Timely topics with “Next Joke”: from kids sports in which everyone gets a trophy, to Disney telling kids to wish upon a star and all their dreams will come true, our unrealistic expectations have set us all up for failure: The Joke is on us.”

A year after forming, at the dawn of the 1990s, Galactic Cowboys was signed by the David Geffen Company as their Next Big Thing, for an unprecedented advance. Geffen already had the Current Big Thing: Guns n’ Roses. But sensing the end of that juggernaut (correctly), Geffen held off on unleashing the Cowboys until sales of Use Your Illusion set had tapered off, and groomed the Cowboys for mega stardom.

Quickly becoming regular fixtures on MTV, including two videos in rotation, everything was going according to plan. But culturally, Generation X was coming of age, and with it, a whole new musical culture. Sensing this change, David Geffen sought out an equivalent to the Cowboys in this new genre, to be the vanguard there. That band was Nirvana.

Geffen released Nevermind alongside the Cowboy’s debut release, and let fate determine which way music would develop in the 1990s. From its place at the cutting edge of a nationwide cultural transformation, grunge ended the reign of metal, the world’s biggest band, and—before they had even really started—Galactic Cowboys.

One of the fans made along the way was executive producer Bill Evans, responsible for bringing together the prog-rock supergroup, Flying Colors. “Everyone has a favorite band they hope will one day reunite. For me, and so many other fans, it was Galactic Cowboys. Mascot’s Jim Pitulski was on the same page, so I called Monty, asking if the Cowboys would consider reuniting.” Evans initially met Colvin through mutual friend Kerry Livgren (KANSAS), another big fan of the Cowboys. Pitulski had known them from when he managed Dream Theater.

“We said we’d only come back if the world needed us. When Mascot sent out the distress call we knew it was time to return. Get ready world. Here come Galactic Cowboys!” — Ben C Huggins (Lead Vocals)

“Sherman, set the Wayback Machine to 1993. The vacuum tubes warmed up and once again, Galactic Cowboys were off on a new mission. There’s nothing like coming home.”  — Alan Doss (Drums, Vocals)

The album’s sound is alternately heavy, whimsical, charging, and crunching, combining inescapable atmosphere with the drive of a band on a mission. Old fans will feel at home, but hard rock fans who have never heard Galactic Cowboys before will also be instantly hooked. As with all Galactic Cowboys albums, the songs are emotional in topic, and often including a large dose of ironic humor. Each song is performed, sung, and written with intense passion.

“It was an absolute pleasure getting back together with the guys to record this album. I think we’ve all grown as musicians and as people since we first got together in ’89, and I think our fans will really love this new stuff.” — Monty Colvin (Bass, Vocals)

A special treat for fans both old and new is “In The Clouds”, the album’s leadoff track and also the first Galactic Cowboys song ever written. Penned in 1989 by Doss and Colvin after the demise of their previous outfit, The Awful Truth, the song explores leaving the banal confines of this world behind and ascending to a higher plane of existence. It’s also the song Huggins sang to earn his spot in the band!

“We can’t wait for everyone to hear this, and it’s great to be back. Back from the Ranch on Mars and onward to the moon.” — Dane Sonnier (Guitar, Vocals)

Previous article
Christmas Lister
Next article
Keeva Got The Proof