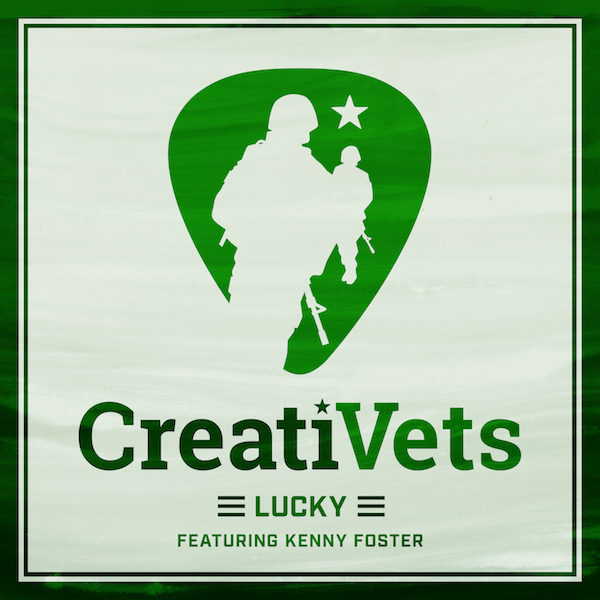 Nashville-based nonprofit CreatiVets and Big Machine Label Group‘s campaign to release a new veteran-written track on the 20th of every month – paying tribute to the 20 veterans and active-duty members that commit suicide every single day – continues today (20/5) with “Lucky,” featuring Kenny Foster, available now (via Big Machine Records) across all major streaming platforms.

Written by Army veteran Brad Blazek alongside songwriter Kenny Foster, David Borne and Seth Cole, the song gives a glimpse into the harrowing story of Blazek’s time in service – one that led him to being hit by a rocket, fracturing his skull and nearly ending his life. Throughout the poignant tune, a message of hope shines through, as it details the most difficult times in his life, all of which lead him to realising just how lucky he truly is.

“Lucky” was created during one of CreatiVets’ lauded songwriting programs, which pair combat veterans with songwriters in Nashville to help them learn to use music as a form of therapy. Earlier this month, this innovative program was featured in a tearful, two-part segment on The Kelly Clarkson Show, leading to Kelly awarding the veteran-run nonprofit with a cheque for $10,000. Watch it HERE.

“This was my first experience writing a song,” Blazek explains. “At first I was skeptical and nervous because I didn’t want to relive such a horrible memory in front of complete strangers, much less professional songwriters. I thought I had nothing to say that could possibly be song-worthy, and I didn’t want to waste everyone’s time. But after meeting everyone, those feelings changed. The writing session ended up being such an empowering and amazing experience. Everyone there was a part of this process because they wanted and were excited to be there, and that felt really incredible. Then, to see my story become a song, I was wowed. My wife said it was the best therapy that we didn’t even know I needed.”

“I’ve been lucky enough to work with CreatiVets for several years now,” Foster adds. “Brad’s story was fascinating, and I appreciated his perspective on everything that had happened to him. Rather than suffer with survivor’s guilt, he saw all of the improbabilities that got him to that writers room as a thing to be thankful for, to accept, and move on from. I hope this song finds other vets with similar outlooks — and maybe offers a small glimpse for vets still struggling with the unanswerable questions, of a more hopeful way to see their own stories.”

Recently featured in PEOPLE Magazine (check out the story HERE), CreatiVets has helped more than 1,000 combat veterans since its founding in 2013 — with more than 400 veterans participating in its songwriting programs to date. The organisation’s utmost goal is to end veteran suicide by offering alternative ways to cope with trauma, using the arts as a therapeutic cornerstone in the road to recovery. Serving as a connector for opportunities that magnify CreatiVets within the entertainment space, Big Machine Label Group continues to contribute to CreatiVets’ operational initiatives through Scott and Sandi Borchetta‘s Music Has Value Fund and through Big Machine Music, which serves as the co-publisher for CreatiVets.

ABOUT CREATIVETS:
CreatiVets’ is a 501(c)(3) non-profit organisation whose mission is to provide wounded veterans struggling with post-traumatic stress and traumatic brain injury with opportunities to use art, music, and creative writing to heal their unseen wounds of war. Their goal is to empower veterans with tools they can use for the rest of their lives and enable them to see their own capacity for success in an arena outside the battlefield. Learn more at creativets.org.

Previous article
EVERGREY AREAS
Next article
A BUNCH OF SQUARES