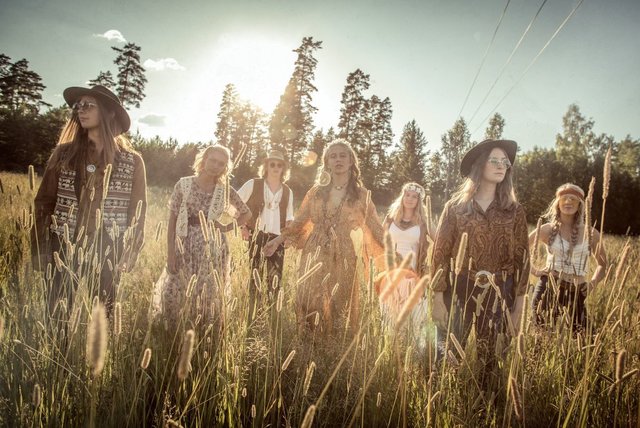 Today Children of the Sün release their second single, Emmy, from their upcoming debut album. Children of the Sün brings back the best part of the vocal harmony hippie era of the 60´s and 70´s with their debut album Flowers. The album is set for release the 26th of July on The Sign Records. Mixing blues rock with a warm feel good folk/country vibe, their sound is retro yet fresh. The band debut album holds strong influences from Janis Joplin, Free and Joe Cocker, still the band can be placed somewhere in the same atmosphere as The Allman Brother Band, Jefferson Airplane and Canned Heat. A reincarnation of the 60´s feeling of nature, soul and rock music can be found in Children of the Sün‘s debut album.

Flowers holds seven songs playing for 34 minutes. Album cover is done by Maarten Donders that previously provided artwork for bands as Maida Vale, Graveyard, Blues Pills and Chelsea Wolfe. Children of the Sün hailing from the deep woods of Värmland, Sweden bring both nature and freedom to their album. The recording was done in ES Music in Karlstad, Sweden. Children of the Sün won the Swedish national music competition Livekarusellen in 2018. In 2019 the band was added to The Sign Records rooster, the label have among other released bands as Hällas, Maida Vale, Heavy Feather and Svartanatt.