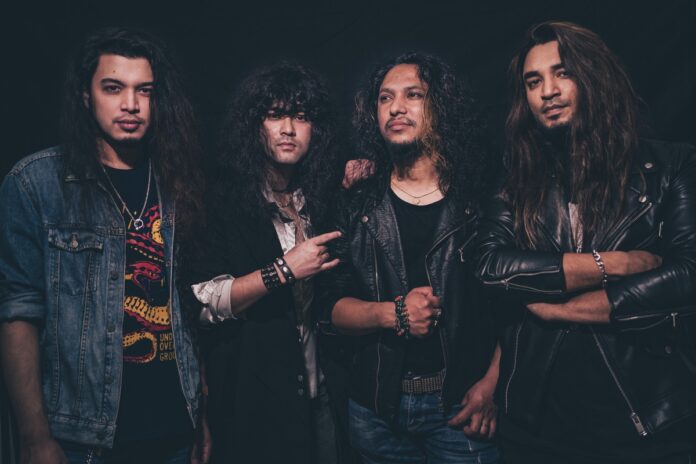 Indian hard rockers Girish And The Chronicles have announced that a re-recorded version of their debut album, ‘Back On Earth’, will be released in late January, with a single and video from it for the song ‘Loaded’ available from today.

Originally released in 2014, ‘Back On Earth’ helped to introduce GATC to a global audience and kickstarted their ongoing rock n’ roll journey.

Asked why his group decided to re-record the album as opposed to simply remastering and reissuing it, frontman Girish Pradhan explains: “We wanted the whole thing to have a fresh start. We have been introducing a lot of musical changes to these songs in live shows and thought ‘Why not do the same with the recordings?’ We always felt that we had technical challenges back in the day and couldn’t deliver the hard hitting sound that we had originally intended, so we introduced some new breakdowns, chord sequences, solos and bass and drum parts to these songs that make them feel closer to where we are now. We didn’t want to mess around too much with the vocals though, which is why I only re-recorded the vocals for ‘Angel’ and ‘Loaded’. All in all it stays true to the spirit of the songs, although we feel that it is now closer to our original vision.”

Girish adds: “each song has its own story, with many released as singles between 2009-2013. We had a lot of struggles, but we were also living our lives to the fullest. More than anything, we were a group of four guys without a care in the world, who just wanted to get on stage and rock. ‘Angel’ was the first song we released and I wrote it around 2008, originally intending for it to be a solo track, but then the band formed. ‘Golden Crown’ was actually a song by me and my brother [Yogesh] meant as a jingle for a local football championship. I wrote the riff and some of the lyric for ‘Loaded’ in 2010 when we were in the process of applying for our first passports. Two of our band members lacked some documents and were told to go home and reapply. We were quite frustrated, thinking of the long journey and the amount of running around we had been doing, for something so simple, plus we were broke as hell. Anyway, the circumstances helped me write the song!”

Founded in 2009 in the city of Gangtok in Sikkim (northeast India), but now based in Bangalore in the southern state of Karnataka, GATC have been credited by many for reintroducing classic hard rock culture to India. Renowned for their electrifying shows, they have toured across India and beyond. Pradhan is also part of the international metal group Firstborne and has previously toured in the UK and mainland Europe with other projects.

GATC have released three albums to date, with the original release of ‘Back On Earth’ followed by ‘Rock The Highway’ in 2020 and ‘Hail To The Heroes’ in 2022.

BACK ON EARTH
TRACKLISTING
1  Ride To Hell
2  Loaded
3  Born With A Big Attitude
4  Shot By The Cupid, Touched By The Devil
5  Angel
6  I Wanna Get That Lovin’ Again
7  Hey You
8  Yesteryears
9  Smile Little Child
10  The Revolving Barrel
11  Golden Crown
12  End Of Civilization