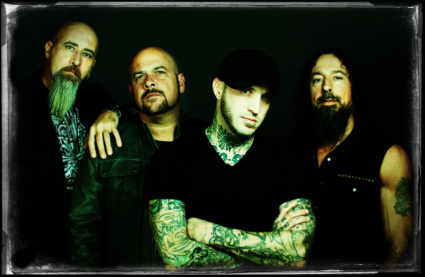 Valley Of Bones Out In May

FULL DEVIL JACKET was living the dream. Then it became a nightmare.

Tours with rock radio giants Nickelback and Creed and extreme scene standard bearers Slipknot and Slayer, a high profile spot at Woodstock 99, a video in rotation on MTV, singles burning up the Hard Rock charts, song placement in the Scream film franchise… Full Devil Jacket was poised for the big time amongst rock’s elite.

After a decade since the release of their debut EP and album, Full DevilJacket returns with the scorching Valley Of Bones. Produced by Justin Rimer (12 Stones), it’s a victorious and impossible to ignore sophomore slab, simultaneously resurrecting and updating the band’s hard rock sound. Longtime fans will recognize plenty of signature elements, but this is the Full Devil Jacket of old on steroids.

Full Devil Jacket lay in steady grooves, meaty hooks and powerfully driving hard rock music that will warm the blood of anybody raised on Alice In Chains, Pantera, White Zombie and Korn. Valley Of Bones is full of truth telling, a strong point of view and brutally honest observations on the life, faith, family and the crumbling power structures across the world. Brown delivers strong commentary on questions that are both freshly relevant and timeless, with his unique perspective and experience.

“When we write music, we only write it if it’s real. I only sing it if I believe in it,” Brown declares. “I only write it if I’ve experienced it. When I listen to some rock n’ roll music today, I hear the same important sounding words as the bands I grew up listening to, but I don’t hear any conviction. Everything I write about, I’ve lived.”

Brown’s heroin overdose ended the Full Devil Jacket fans had come to know and love through hit singles like “Where Did You Go?” and “Now You Know” in 2002. FDJ was first discovered by producer Malcolm Springer (Matchbox 20, Collective Soul) then signed to Island/Def Jam under the watchful eye of Tom Zutaut, the A&R legend best known for his work with Motley Crue and signing Guns N’ Roses to Geffen.

Brown returned refreshed, reinvigorated and renewed as singer/songwriter for DAY OF FIRE, touring with Papa Roach, Saving Abel and Sevendust, as well as co-writing (and touring) with Daughtry. The band’s debut album was nominated for a Grammy and won Album Of The Year at the GMA Dove Awards in 2005, where the group was also nominated for New Artist Of The Year and Rock Song Of The Year. But after three successful records, Day Of Fire went on indefinite hiatus in 2010.

But just as Brown’s brush with death once ended the band, the actual loss of another band member brought Full Devil Jacket back together years later. They first reunited to raise funds for guitarist Michael Reaves, who was battling cancer and after Reaves succumbed to the disease.  Brown and cofounder/drummer Keith Foster decided to resurrect the band in full, in their fallen friend’s honor.

“Mike is really the reason I’m playing music today. He built me up. He showed me the ropes,” says Brown. “We got together to do a fundraiser for him and it was the first time we had played together in about six years. That gave the band a spark of hope about returning, ‘though it would be a few more years before we came back.”

“It started as Keith and I talking about how much we missed playing music professionally. I was in Texas and he was in Tennessee,” Brown explains. “Whether I’m in the music business or not, I’m a songwriter. Keith and I were talking about doing a new project and he said, ‘Why don’t we give Full Devil Jacket one more try?’ After Mike passed, we decided to do another record and that’s exactly what we did.”

The gritty sludge of Down is a great reference point for Valley Of Bones, as well as the dark melody of the mighty Alice In Chains and Modern Rock accessibility of Stone Sour. There’s even some old school, throbbing hard rock grit and grime, particularly in songs like “Picturebox Voodoo,” a scathing indictment of the mainstream media and a pop culture that obscures designs toward the apocalypse.

Lead track “Killers” is jarring in its immediacy and straightforward trip through the mind of an addict. “Paper Crown” is about the feeling of inferiority that drives some of the people who carry themselves with the most supposed strength.

“Seven Times Down” is an aggro riff-monster with technical flourishes and a sick, classic FDJ breakdown, as Brown exposes the struggle of a righteous man battling his demons and falling, only to arise once again. Which is a fitting analogy for FDJ in general – a band that had the world at their fingertips, lost it all, and now rises again.

“If I can share with people my struggle and my mistakes with people and tell them there is hope,” says Brown, “even when we stumble, we rise again. That’s what it’s all about.”

Previous article
Dew Scented On Tour
Next article
Featured Band: Between The Buried And Me