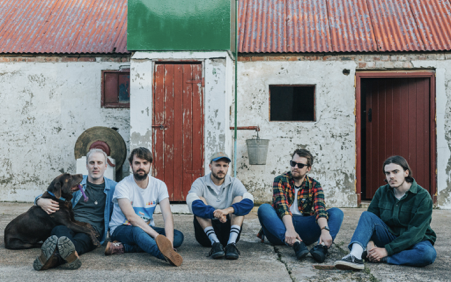 Northern Ireland stalwart’s smallmint have unveiled their new single “The Dark”, plucked from forthcoming debut LP ‘where we all end up in the end’.
A twangy and melodic track that wears its heart on its sleeve and treads the line between indie-rock and Americana, “The Dark” is a sanguine spyhole into the band’s upcoming debut ‘where we all end up in the end’.
Meandering through an alluring mesh of throbbing drum beats, tender vocals and steady guitar licks, the confident cut breathes new life into indie-rock, proving that honest and organic guitar music is as essential and evocative as ever.
*****
With an assured sound indebted to their years of service amongst the music scenes of Belfast, Glasgow and beyond, smallmint are a collective of musicians hailing from various parts of Northern Ireland. Crafting melodies that are as emotive as they are euphoric, the forthcoming record is flecked with spatters of alt-rock, Americana and folk glimmering amongst a handful of pop, bluegrass and country influences.
Working in close collaboration with producer Caolán Austin, the album was conceived in 2017 when the band — led by frontman Andrew Cameron-Braithwaite — laid down its first foundations at Smalltown America Studios in Derry. Shedding their blood, sweat and tears into a record that is bound to stand the test of time, Cameron-Braithwaite grapples with heavy subject matter that is affecting and earnest, but never feels devoid of the possibility of a resolution.
Playing like a long overdue meeting of the minds of Pinegrove, Frightened Rabbit and Julien Baker, ‘where we all end up in the end’ is a confident statement of intent — and a testament to the band’s hard work, musicianship and self-imposed high standards.
Speaking of the album’s production, Cameron-Braithwaite says:
“We wanted the album to feel natural and to actually sound like a band playing live in a room, which is exactly how it was recorded. It was important for us to keep that space and energy in the recordings — no need for overproduction or too many overdubs, so that the arrangement of the music and the emotion within the lyrics could speak for themselves.”
This stripped back and simplistic approach to arrangement is evident on “The Dark”, and its gutsy melodies and affecting lyrics speak for themselves, without the need for overcomplications.
With the album set for release next month, the band’s earlier singles boast smallmint’s breadth as musicians too —   from the clangorous and anthemic “Synonym”, to the soft and folk-tinged ballad “New Year” and the overcast and emotive “Pseudonym”, smallmint swiftly traverse genre whilst sticking true to their heartfelt and honest undertones.
This sprinkling of initial singles hasn’t gone unnoticed too, and the band have garnered praise from the likes of Golden Plec, Chordblossom and The Sunday Life, who said the band “are sure to remain one of the most talked about acts on the scene.”
Likewise, BBC Introducing‘s Gemma Bradley described the band as “effortlessly good”, whilst The Last Mixed Tape said earlier single ‘Pseudonym’ “captures the slow-burn, patient song-crafting shown throughout the band’s richly set debut record”, and Hot Press wrote: “The band merges some of Northern Ireland’s most prolific songwriters and musical talent. The twang of Fender guitars, the pounding of a drum set and reflective vocal delivery act as a reminder that urgent and evocative guitar music is still as essential as ever to the Irish music scene.”
As they gear up for the release of their reputation-making debut, smallmint will also be cutting their live teeth with a handful of shows in Belfast and Glasgow, including a showcase slot at Output Belfast, Ireland’s biggest one-day music conference and live music showcase. Full dates and details below..
*****
smallmint Live Dates 2022