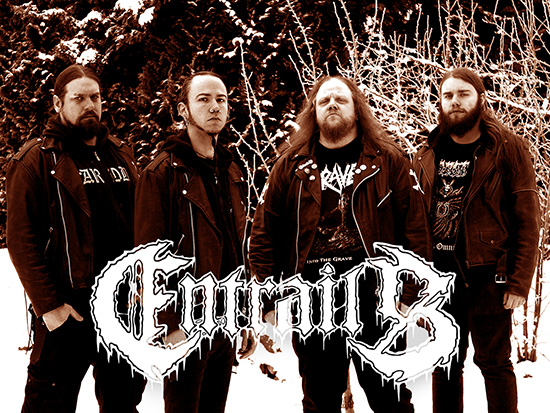 Line up changes for death metallers

After five successful years filled with four albums and some demos and splits and great shows and festivals around Europe, ENTRAILS main singer and bassist Jocke Svensson and drummer Adde Mitroulis are leaving the band for new blood. Their last performance with ENTRAILS was at Netherlands Deathfest last week.

Comments guitarist Jimmy Lundqvist: “It has been a pleasure having those two guys in the band for all those years. Without them ENTRAILS wouldn’t have made the albums and shows that happened in the past. Unfortunately their time just wasn’t enough anymore to give ENTRAILS the time and focus that I wanted for doing even more shows and more intense work with the band. It is not easy to combine several other bands plus familys when more time is needed to push ENTRAILS even harder. And therefore the guys decided to leave in a friendly matter and what’s best for the band ENTRAILS. We wish them all the best of luck in their other projects.”

Martin says: “I’m really looking forward to bring death upon earth with Entrails as the new torturer of heads!”

Tommy says: “I’m excited and proud that I will be a part of Entrails, I love old school death metal and I’m looking forward to continue and make some brutal music with these guys!”

The first show with new line-up will be in Stockholm on the 26th of March and the guys have worked hard and are prepared for this. ENTRAILS will continue to deliver the same brand of old school Death Metal as before!