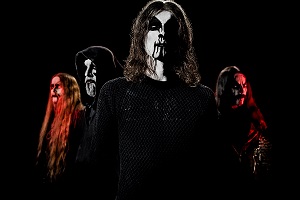 Black Metal tyrants 1349 bring their well-known aural hellfire to this years Slottsfjell festival. Be there when they bombard the stage with their frantic deathrattle!

Founded in Norway in 1997, 1349 have remained a constant influence on the Norwegian black metal scene. With a penchant for lightning speed riffing, blazing drums, and apocalyptic lyrics, the band has trail-blazed the underground, surpassing many of their peers through brute musical force. Following a quintet of landmark albums, 1349 is set to re-establish their dominance in world-wide extreme metal scene. Their latest release “Massive Cauldron of Chaos” leave no doubt as to their intentions. Not looking back, but constantly evolving and challenging our perceptions as to what to expect from an extreme metal band.