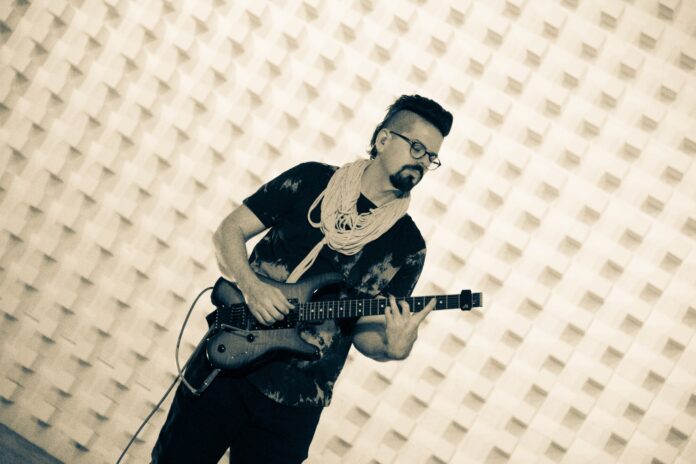 Jan Rivera comments: “Existential Paranoia is a play on words. It’s simply a reflection of the times. The high amount of noise in the world almost makes it feel like for many, paranoia is a direct result of existing…

“Using the word existential also makes reference to the fact that the space created the last few years has propelled introspection and sort of given fuel to the existential crisis. This is why many people have not returned to their previous jobs. They had a view into “the world that could be” and decided to pursue it.”

Jordan Rudess comments: “I get asked to do a lot of projects. I have to say that many of them are really good, but it’s not very often that you find a unique compositional voice. When I first heard Jan Rivera’s music, I was freaking out!”

Elements of Allan Holdsworth, Dream Theater, The Aristocrats, and Scott Henderson abound throughout Existential Paranoia, displaying a musical sensitivity and rhythmic guile which marks out this new voice as one to watch. Much like his esteemed predecessor John McLaughlin, Jan displays a strong Indian Classical musical influence, including tabla master Zakir Hussain. For example, compositionally, Jan’s musical counting is based upon Konnakol, an Indian rhythmic method of counting metre.

Well-regarded as a music educator, Jan is a graduate of the revered Musicians Institute’s Guitar Institute of Technology in Los Angeles, where he studied under Alex Machacek, Greg Howe, and Scott Henderson, among others. His 2014 textbook ‘Advanced Rhythmic Concepts for Guitar’ was a bestseller, and received rave reviews globally. Jan is an on-set consultant and curriculum designer for Fender Guitars and has taught and performed with Guitar Workshop Plus, which commonly features guitarists such as Tosin Abasi, Paul Gilbert, and Andy McKee, among others.

On the album art, Jan comments: “The “world that could be” is visible in the album’s artwork. You can see that the colors outside of the door are monotone, while inside the door everything is full of color. This represents “what could be”.

“The surreal elements you see within the city represent the dreams and creative parts that capture our imaginations and propel us to seek something more, something meaningful. This is something that I deeply identify with, as it also mirrors my own struggles with finding my voice as a musician.”