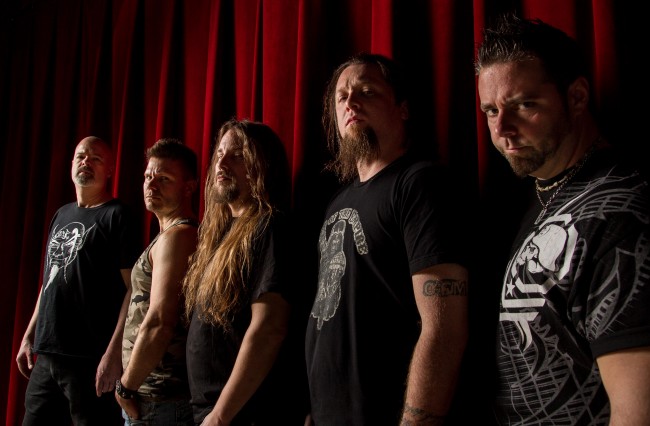 Montreal-based five piece [EVERTRAPPED] has teamed up with MetalNationNews for the exclusive premiere of ‘Palace of Injustice’, the first single from the band’s third album ‘Under The Deep’ (Hellstorm Recordz) due on October 16th to follow 2012’s Anomaly and 2010’s debut Tales From The Supermax.

“‘Palace of Injustice’ is a track about a stab at anyone blinded by the indoctrination of any institution and their ultimate demise that likely follows due to their ignorance towards it. However, it does aim more at the disgust of the institutions themselves and not so much the ignorance of the people.” comments vocalist James Brookes.

To listen to ‘Palace of Injustice’, please visit the following link: http://metalnationradio.ca/exclusive-premiere-evertrapped-track-palace-of-injustice-new-album-under-the-deep-hellstorm-recordz-out-oct-16th/

Delivering relentless brutal melodic death metal since 2007, [EVERTRAPPED] intentionally wrote their band name with enclosed brackets to signify the trappings of modern life for all of us and how people, despite their best attempts to break out of the mold are still affixed to a simple controlled existence and futility.

Members of the band bring together their collective experience from the Montreal metal scene to create their heavy brand of death metal. The guitarists Frederick Dupuis (ex-Daggerfalls) and Vincent Benoit hammer out raw guitar while drummer Eric Lemire (ex-Apocalypsys, ex-Ice Castle) pummels the drums. Their versatile frontman James Brookes (ex-Ammonia, ex-One Final Moment, Continuum) easily alternates between strong clear vocals and low bellowing screams giving listeners the illusion of more than one vocalist. John Yates (ex-AraPacis) weaves together each song with his driving bass lines to keep the punishing tracks energy at an all time high.

Lyrics are intentionally slightly abstract to lure fans to draw their own conclusions despite a perceived understanding of the tracks. Themes for the music revolve around personal turmoil and even stringing together the image of a future where the world is on the brink of an apocalypse.

The band’s influences range from Death Metal to Melodic Death primarily, along with some classic thrash and speed metal, which explains their technicality and diversity sonically. Live, the band is a whirlwind of aggression and sonically abrasive, yet sporadically melodic vocally and instrumentally.