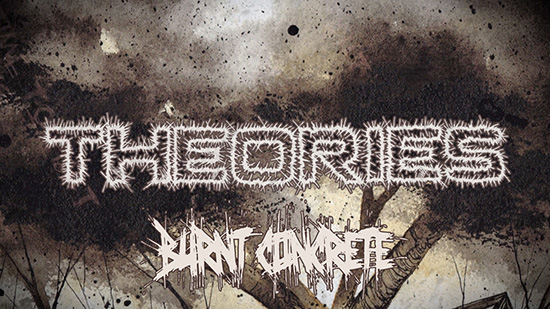 Boasting ten vehement tracks of grisly, confrontational, crust-infused death grind, Regression is the sound of social discontent, economic uncertainty, environmental catastrophes, and the inevitable cycle of decay. Elaborates the band of opening rager, “Burnt Concrete,” “Lyrically this song represents the theme of the record very well, the current, very fast decline and beginning to the end of society, civilization and our all-around existence. But as of recent, our world has been going downhill for a long time now but as of recently, the downward spiral has been regressing at a hyperspeed rate. To sum it up, we’re all fucked and there’s no fixing anything now. Musically, this song represents the feel of the record as well: technical death grind. Instead of going in depth describing what it sounds like and coming up with catchy ‘sub genre’ phrases, just give it a listen and let the music speak for itself.”

Observes No Clean Singing: “If you’re not pissed off, you shouldn’t be playing grind, and ‘Burnt Concrete’ is very pissed-off metal. But at the same time it’s got some melodic hooks and punishing rhythms that give the song character, beyond the pure adrenaline rush that it delivers.”

Feel (and read) the wrath of THEORIES‘ “Burnt Concrete” lyric video at THIS LOCATION.

And if you missed it you can still witness the sonic oppressions of “Shame,” still streaming at NoiseyHERE.

In related THEORIES news, the band’s in-studio performance on KEXP (90.3 FM in Seattle streaming worldwide at KEXP.ORG) will air this Sunday, March 15th, 2015 at 12:00am PST as part of KEXP’s Seek And Destroy segment. Remind yourself to tune in by RSVPing to the event pageHERE. That following weekend, on Saturday March 21st, 2015, the band will be hosting KISW 99.9 Metal Shop on Saturday March 21st. Stream it live at THIS LOCATION from 10:00pm – 2:00am PST. Then on Tuesday, March 24th, the day Regression drops, Axler and bassist Kush Karimi will be hosting a DJ night at Linda’s Tavern 9:00pm till 2:00am PST in Seattle where they’ll be spinning the record in its entirety as well as other metal and non metal tunes. Additionally, THEORIES is honored to level the stage of the Showbox in Seattle March 31st as area openers for the mighty Decibel Tour. Featuring At The Gates, Converge, Pallbearer and Vallenfyre, the performance will serve as the band’s CD release show.

The THEORIES takeover continues on April 18 (Record Store Day). The band will take part in a special in-store performance at Silver Platters in the SODO at 2:00pm PST, followed by a meet and greet and record signing. The following month the band will be headlining the Seven One Grind Fest in Colorado Springs with Capitalist Casualties, Weekend Nachos, Samothrace and more with further onstage debauchery to be announced in the coming weeks.