With less than three weeks to go before their new one, here’s everything you need to know

The problem of dropping a record as career-defining as 2013’s Everblack is that the bar is set so high following it up is a galling task. That The Black Dahlia Murder’s response to such a challenge comes in the form of the devastating Abysmal serves to once again demonstrate why they are considered one of the most vital bands in contemporary death metal. “Once the record started to come together we knew it was going to be something special,” states vocalist Trevor Strnad. “It’s more urgent, it has more dynamics, it’s a more emotive record, and it has a more raw, angry sound to it. It’s still million mile-per-hour death metal, but when you invest so much thought and emotion into what you’re creating you end up with a record that does stand out, and we can hold our heads up high and say yeah, this is our best work.” 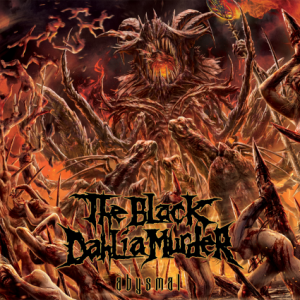 Since 2001, the Michigan quintet have focused their efforts on writing music that embraces all the finest qualities of melodic death metal yet does not shackle them, giving them room to constantly evolve and grow as musicians. With Abysmal the band have once again progressed while retaining the signature sound that has won them their devoted legion of fans, and making it clear that their best is not in their past. “I still love Everblack and everything we achieved when touring it, and in fact going into that record we faced a massive challenge in following up Ritual (2011), which had also been huge for us. Having two records in a row connect with fans in such a way was amazing, but definitely piled on the pressure going into this new one, because we don’t want to let them down, and we don’t want to let ourselves down. But we learned a lot in making those two records, and we brought that into Abysmal. We know we can take people’s heads off playing super fast, but that doesn’t always give listeners something to really chew on. We’ve learned to focus on creating some drama, interesting dynamics, and most importantly really investing time in thinking about how different parts of songs will make you feel.”  While crushingly violent, Abysmal is certainly a long way from being a two-dimensional blast-fest. Often evoking potent melancholy or icy unease, tragedy and apocalyptic gloom also insinuate into the songs alongside the all-out fury, for make no mistake, while this record boasts a variety of dark and atmospheric moods the band have perhaps never sounded so downright pissed. The likes of “Re-Faced” and “Threat Level Number Three” are purpose built to incite chaos, and some of the fastest material the band has ever unleashed explodes from the likes of opener “Receipt”, “Asylum”, and the haunting title track.  This can largely be credited to drummer Alan Cassidy, who joined the band in 2013. “With both Alan and Max (Lavelle, bass) new to the band there was a lot of speculation ahead of dropping Everblack, and though we knew we had a great record it was nice to prove the naysayers wrong. This time out Alan was really able to stamp his identity on the record, and yeah, there was a point where Brian (Eschbach, guitar) said level with me dude: just how fast can you go? And Alan unleashed this thing and we were like okay, let’s go faster than we’ve ever gone then!” Strnad laughs.  “But it’s not just that, he’s injected so much style into everything. He writes really interesting fills, and he cares about having variety and really speaking with what he’s doing, and he was involved with the song writing more than any other drummer has been in a long time.” Strnad is just as keen to sing the praises of Lavelle, who also made a more substantial contribution to the record than he did to its predecessor. “We look back on every record and say we need more bass, and Max is a really prevalent part of things live, so we wanted to have that come across more, and he totally nailed it. It’s definitely a dirtier bass sound than we’ve ever had too, which sounds more wild, more live, and adds to the punch.” Guitarists Eschbach and Ryan Knight bring a cavalcade of riffs to the table, upping the stakes in technicality, melody, and sheer blunt force trauma, letting intoxicating flavors of black metal and NWOBHM creep into the vicious assault, and Knight’s soloing is at a point where Strnad believes his name should rightfully be thrown in amongst the genre’s most prominent shredders. “With every album we allow a bit more time for him to solo and just totally own it, and when he nails it he’s really at that Megadeth Rust In Peace level. I do think he deserves to be spoken about in the circles of great metal guitar players. Marty Friedman should buy Ryan a beer, I think, and I genuinely don’t see that as something really out of the ballpark.”

Of course, Strnad’s own contributions are a vital aspect of every TBDM album, and he once again delivers, both in regards to his lyrics and caustic vocals. While his lyrical inspiration remains primarily rooted in horror and the macabre, on Abysmal the theme of hell is prominent, whether it be a literal hell, figurative, or personal one. “Stygiophobic”, for instance, which is a slower, crunchy, doom-inflected dirge, sees him focusing on those who are irrationally afraid of hell. “These people spend their every waking moment thinking of going to hell, and every time they go to sleep they see all their friends burning in hell, and this obsession has become a debilitating psychological condition, which is awful, and interesting.” Alongside this, on the scathing “Threat Level Number Three” Strnad goes inside the mind of a “recidivist rapist molester, who has been chemically castrated, focusing on his internal dialogue as he’s trying to reenter society.” He explores more fantastic subjects, such as the cruelty and violence of Vlad The Impaler – the inspiration for Bram Stoker’s Dracula – in the more melancholic “Vlad, Son Of The Dragon”, and he also reflects on issues that have affected him more personally, allowing himself some form of catharsis, most notably on “Receipt” and the title track. However, while despair, isolation, and thoughts of suicide haunt these songs, on burly closer “That Cannot Die Which Eternally Is Dead” he pushes the band’s perseverance in the faces of those who might consider counting them out. “What I’m saying in that song is that we can’t be stopped by normal means. No matter what kind of challenge or roadblock we face we’ll just keep coming, and I think by now our fans know that.”

In tracking the record, the band re-enlisted producer Mark Lewis (Cannibal Corpse, Whitechapel) and former bass player Ryan Williams, who also helped engineer Everblack, their intent to get away from the overt sonic sterility affecting far too many contemporary metal albums. This is a prominent factor in why the record sounds as angry as it does, the band focusing on capturing a raw, live sound that doesn’t always strive for absolute perfection. “We wanted a sound that would show we’re actually human beings, and not just computers playing death metal. We were not going to resample the drums, sound-replace or quantize anything. We didn’t want to have the exact same drum sound as every single freaking band seems to have right now, and that’s why essentially going backwards was going forwards for us. The guys have the chops to do it, so it’s not like we need to lean on Pro-Tools to make an album, and I think it’s the most energetic thing we’ve done since the very first record, Unhallowed (2003), which had a similar live feel.” As always, artwork was of great importance in expressing the band’s vision, and this time they turned to Russian artist Daemorph, who is known for his work in the brutal death metal community. “Again, I was a little unsure quite how we would follow up Everblack, because the artwork Nicholas Keller did was incredible. But we told Daemorph we wanted something that really looked like hell, and he went above and beyond. The first time I saw it I was like yep, that’s hell, and I know I definitely don’t want to go there!”

At this stage in the game, with typically modest aspirations, Strnad is more interested in maintaining their longevity than shifting records, and if the band never gets any bigger than they are right now he will “die happy a hundred times over”. However, this does not mean there is anything even vaguely resembling an end in sight. “We’re still young at heart and I feel like the evolution of the band still has a long way to go. I don’t see a ceiling on what we can do, and there will be no end. It’s just going to be a constant ongoing fight to make better music and be a better band, and it’s always going to be time to kick ass.”