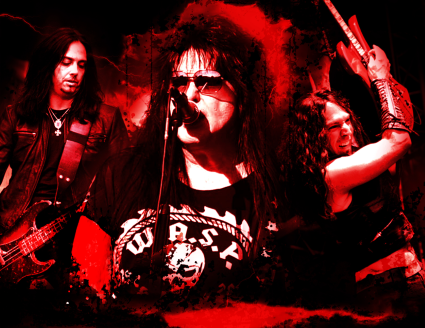 Blackie is back next week and its a stormer

W.A.S.P. stormed onto the Los Angeles metal scene in 1982 with exploding cod pieces, drinking blood and attacking their audiences with raw meat.

The release of their self-titled debut in 1984 and second album, The Last Command, a year later cemented W.A.S.P.’s over the top reputation and their place in L.A. legends and lore with savage stage shows and hit songs ‘I Wanna Be Somebody’, ‘L.O.V.E. Machine’, ‘Blind In Texas’, and of course the controversial track ‘Animal’. Some 30+ years later, W.A.S.P. is still recording, still touring, and still dangerous.

Vocalist/guitarist Blackie Lawless, the sole remaining member of the original W.A.S.P. line-up, has returned with the band’s 15th official studio album, Golgotha. It marks the end of their longest break between records, and is a potent follow-up to Babylon from 2009. Circumstances such as requiring reconstructive surgery on Lawless’ right shoulder, a 30th Anniversary tour, and Lawless suffering a broken leg in 2013 held up the writing and recording for Golgotha, but looking back he considers the delay a blessing in disguise. “It gave us the time to reflect on the music in a way we never really had before,” says Lawless. “Previously, I had taken two years to make a record, but never that amount of time to sit and craft and decide what I liked and what I didn’t. You hear every band say the same thing: ‘It’s the best thing we’ve ever done…’ but the truth is they don’t know because they’re too close to it. You need time to get away from it to really reflect so you can tell if it’s any good or not. 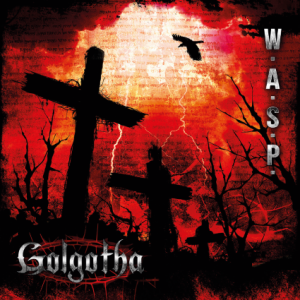 That was one of the big benefits of spreading this out over a four year period is I was able to be honest with myself.” “Golgotha”, the site where Christ was crucified outside Jerusalem’s walls, was the inspiration for the title track. The title along with the biblically themed album artwork set an ominous tone for the entire album. Lawless says, “sonically, I think Golgotha pays tribute to the ’70s. A lot of the time you really don’t see it until the end because you work on each track individually. There are definitely ’80s and ’90s influences here, but this is more of a ’70s record than anything”. Nine songs clocking in at almost an hour in total make for an epic W.A.S.P. outing, particularly for diehard fans that remember when the band went from being rabid party animals on their first three albums to frighteningly artistic and intelligent on The Headless Children and its follow-up, The Crimson Idol. Lawless and Co. do indeed reference those records on Golgotha; in fact, “Miss You” was the first song originally written for The Crimson Idol, finally brought to life here. It isn’t a rehash of old glories, however, but rather a collection of challenges brought to successful conclusion.

“The biggest challenge is subject matter because every time you make an album you have to ask yourself ‘Who am I right now?'”, says Lawless. “It doesn’t do you any good to try and write from the perspective of five or 10 years ago, or what you think is happening on the charts. When I started I didn’t have any idea where I was going. Over the years I’ve learned – and this is not easily done – you have to trust yourself with who you are at the moment.You have to trust that if you’re writing with conviction the song is going to somehow take shape. The Golgotha record ended up taking shape to a point that it took on a life of its own.”

Golgotha tracklisting: “Scream” “Last Runaway” “Shotgun” “Miss You” “Slaves Of The New World Order” “Eyes Of My Maker” “Hero Of The World” “Golgotha”