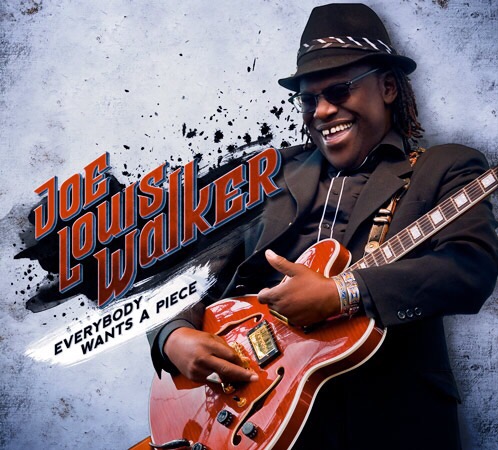 “I’m old school and that’s alright, I’ve still got a young blood’s appetite,” so sings Joe Louis Walker on the track “Buzz On You.” And in doing so, he might just have summed this record up rather perfectly.

He’s 66 years old, he’s played guitar since he was 14, along the way he’s played with artists as diverse as Tower of Power, Bonnie Raitt, Buddy Guy, Taj Mahal and Ike Turner, and it’s 29 years since his first solo outing.

In short then, he has absolutely no right to sound as fresh as he does for much of this. The title track is like Southside Johnny after a load of E numbers, while “Do I Love Her?” Is funky and bluesy and downright catchy.

“….Piece” is many things at many times but the aforementioned “Buzz On You” (which contains the line, “smoking reefer and drinking homemade wine, makes the body feel mighty fine”) is almost perfect barroom boogie and you imagine would sound magnificent live.

It can get dark when it want to as well, “Black And Blue” is infused with longing, but the album seems happier when it’s just getting its freak on. “Witchcraft” is laid back and bluesy, and “One Sunny Day” is almost instantly familiar.

Walker is deeply religious man, and one whom sung on the Christian scene for a decade before returning to his blues roots, that spiritual side is shown with the brilliant instrumental “Gospel Blues” but more explicitly on “Wade In The Water” which follows. The mark of the record, though, is that those songs can be enjoyed by the non-believers amongst us.

It’s best moment, however, comes towards the end, only Walker knows if “Man Of Many Words” is meant to sound quite as much like “Hard To Handle” as it does, but who cares? Sounding like Otis Redding has never been a bad thing, and it’s most certainly not here either.

This superb collection ends with a couple of straight-ahead blues stompers “Young Girl Blues” is the classic good-girl-gone-bad story, before a massive dollop of lust is added to “35 Years Old” which, you might say, is about as old as the pensioner singing these songs sounds throughout this record.

Superb and diverse just about covers it – and who doesn’t want a bit of that?

Previous article
Featured Release: Golgotha – W.A.S.P
Next article
A Night At The Opera…..