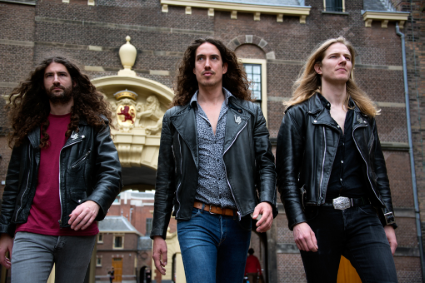 At The Crack Of Dawn – the fourth full-length album from the hard rocking, Dutch three-piece – was released via Ván Records in October.

It’s first track to be unleashed was Walking On Tightrope – a song that is recognisably VANDERBUYST, but with a more mature style to the songwriting, and a polished sheen to the production. Long time fans won’t be disappointed, but the hooks and riffs are set to draw in a whole new legion of VANDERBUYST followers.

The band themselves are looking forward to people hearing the album, with drummer, Barry, commenting: “Eleven catchy hard rocking songs, as you can expect from Vanderbuyst. But damn, you will be surprised.” Jochem, the band’s vocalist/bassist added “If there would be a greatest hits compilation following this record, it would contain 80% of At The Crack Of Dawn”.

Having spent the last few years conquering European festivals (Graspop, Hellfest, Bloodstock…), triumphing in support slots for Steel Panther, Judas Priest and Ozzy Osbourne, making a dent in the Dutch album charts, hitting the road with Saxon, playing as far afield as Beijing, and appearing on Dutch national TV and radio, VANDERBUYST had a lot to draw on when it came to writing album number four. Their experience so far has been a whirlwind of kinetic energy and high powered rock.

To best capture their live force, tight songwriting and heavy riffs, they enlisted producer Martin Furia. To put the finishing touches to their creation, the album was sent to the world famous Sterling Sound studio to be mixed; if it’s good enough for Guns ‘n’ Roses and AC/DC then it’s perfect for VANDERBUYST.

At The Crack Of Dawn sees VANDERBUYST rejuvenated, invigorated and ready to continue conquering Europe and beyond. A handful of live dates have already been announced in support of the album. Guitarist, Willem, commented “This album feels really good, like a puzzle everything fits. Sound and songs connect in a powerful way. Can wait to see the reactions live.”