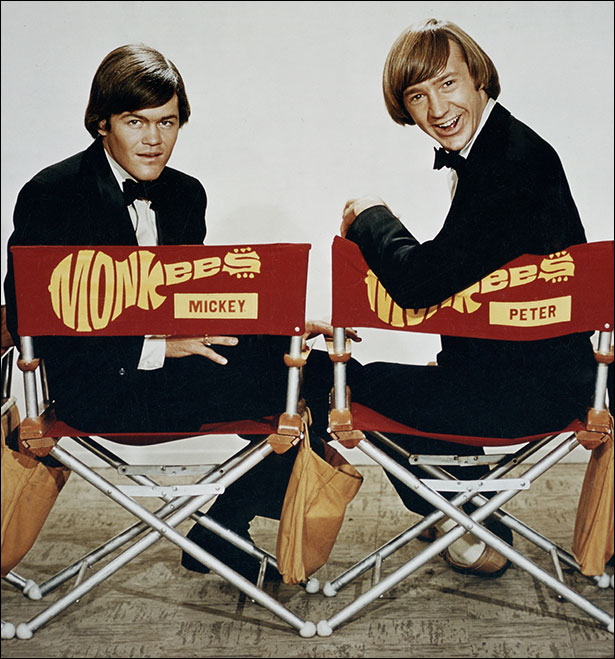 When four young men were cast in the television roles of a struggling rock band inspired by The Beatles’ A Hard Day’s Night, few could have predicted the impact The Monkees would make on music and pop culture at large, an impact that still reverberates 50 years later.

Assembled in Los Angeles in 1965 by Bob Rafelson and Bert Schneider (creators of Easy Rider) for the television series The Monkees, the quartet of Micky Dolenz, Michael Nesmith, Peter Tork, and the late Davy Jones brought a singular mix of pop, rock, psychedelica, Broadway, and country to their music.

The TV series paid tribute not only to The Beatles, but also to the comedy stylings of The Marx Brothers and Laurel and Hardy as well as the pop-art sensibilities of Warhol and the emerging San Francisco psychedelic scene.

The Monkees’ first single, Last Train to Clarksville, was released in August 1966, hitting #1 and serving as advance publicity for their series, which debuted on September 12. When the group’s self-titled debut album arrived in stores a month later, it quickly headed for the top spot of the Billboard charts, where it would ultimately sit for 13 of the 78 weeks it remained in the Top 200.

Two decades later, in the midst of a new burst of Monkee-mania, The Monkees popped back onto the charts, bringing the total number of weeks to 102).

In the UK their show debuted on new year’s day of 1967, driving their latest disc, I’m A Believer (composed by Neil Diamond), to the top of the charts.  As Monkeemania swept Britain, the band scored further hits including Last Train To Clarksville, A Little Bit Me, A Little Bit You, Alternate Title (composed by Micky Dolenz under the title “Randy Scouse Git”), Pleasant Valley Sunday, Daydream Believer, Valleri, and D.W. Washburn.

By the time the group’s TV series aired its final new episode, the Monkees had charted four albums – The Monkees, More of the Monkees, Headquarters, and Pisces, Aquarius, Capricorn & Jones, Ltd.  They also launched their own magazine, Monkees Book Monthly, as well as various comics and annuals.

After the series’ two-season run, the group went on to star in the cult feature film HEAD(co-written and produced by Jack Nicholson) and a TV special, 33 1/3 Revolutions Per Monkee, while also continuing to record new material. As the ‘60s gave way to the ‘70s, the members of the Monkees eventually gave in to their individual musical interests and went their separate ways… for a while.

The Monkees’ cult runs deep in the UK, inspiring boy bands everywhere and racking up two more Top 20 albums in 1989 and 1997. Their last tour of the UK in 2011 climaxed with a sold-out show at London’s Royal Albert Hall.  The forthcoming London Hammersmith Eventim Apollo concert on September 4th will be their first concert since that time and the untimely passing of Davy Jones in February 2012.

Now Micky Dolenz and Peter Tork carry on that tradition with a full evening of magic music and multi-media splendor, including rare films and images from their series. Their new show features all of the Monkees hits, plus an intimate acoustic set and selections from their cult classic, HEAD. This Evening With The Monkeesis sure to be one to remember for fans on every level.