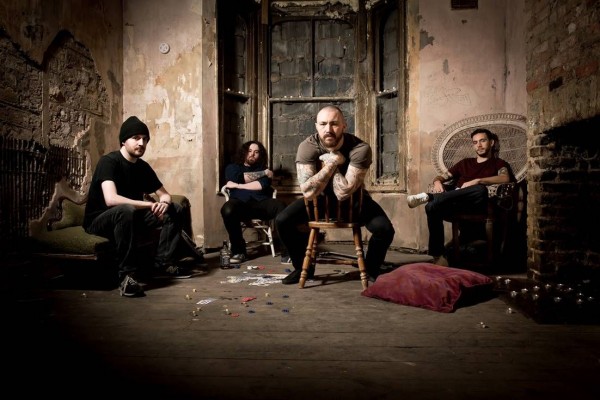 Stoneghost are preparing to release a new on a major label. But there’s waaayyyy more to it than that. Read on.

Sometimes you have to start from the present and work backwards to get a story in context. On 27th April 2015 Stoneghost will release the relentless and blistering ‘New Age of Old Ways’ on the Mascot Label Group (Black Label Society, Volbeat, Gojira, Joe Bonamassa), but the band very nearly never made it to this point.

Front man, tattoo artist and mouth piece Jason Smith recalls; “I was having a kid and I couldn’t cope with it, I didn’t think I would be able to carry on with the band too, I wasn’t in a good place.”

Deciding to depart with a powerful epitaph of what they were capable of, every strained emotion, the fury and anger that rose from the pit of each stomach was pushed to the limit to create a beast of significance, to collectively exit the world with a ‘New Age of Old Ways’. The last record of a promising but fledgling act, it was then that the reverberating noise reached the ears of Mascot and things were to change.

Formed in Bromley, South East London in 2007 amongst a thriving underground scene, Jason Smith (vocals) began the journey with Cris Finniss (Drums), Jamie Nash (Bass) and Andrew Matthews (Guitar) as Snakebite. The quartet quickly became a dominant fixture on the London circuit with their blend of hardcore, metal and adrenaline fuelled rock.

In 2009 they opened Bloodstock Festival and stormed the stage in front of 1500 people. This led to them playing the Ronnie James Dio Stage at Bloodstock the following year alongside Opeth, Fear Factory, Children of Bodom, Gojira and the Devin Townsend Project. A trip to Germany to perform at the Wacken Open Air festival came next as did Metal Hammer’s Hammerfest IV in 2012.

It was at this point in 2013 when Jason was at his dilemma “This was when I wrote ‘Faceless Ghost’” Jason continues. “It’s about my daughter, she was on the way, I was feeling apprehensive and scared about the responsibility and seeing a therapist at the time, I was having some really low points, but because I had a daughter on the way it gave me the reason to sort myself out.”

Live is where they thrive, they occupy every space of the stage and if that means crashing into each other to get the energy across then that’s what it takes. Sometimes the energy and the aggression from the show spills over and it’s not been unknown for the band to turn on each other, such is the adrenaline fuelled performance. “We’ve beaten the shit out of each other” explains Jason, but Jamie reflects; “the thing is, it’s not made us enemies, it’s made us brothers.”

Cris; “we were able to fall out and get back together again – we’ve been through so much shit personally and together, I don’t think anything would break us now.”

‘New Age of Old Ways’ is the new beginning for Stoneghost and it’s just the start, they going to bring the noise and bring it loudly.