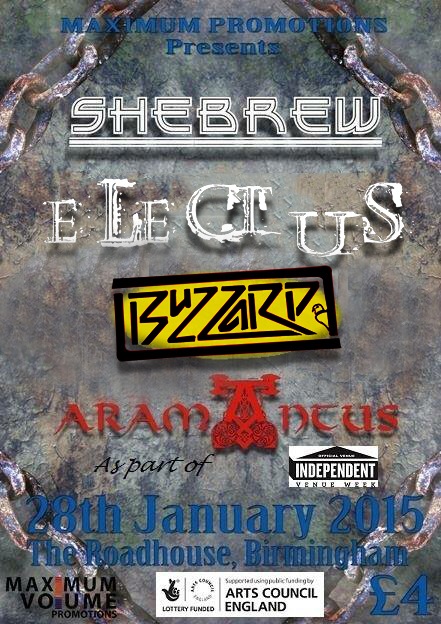 The second of our showcase nights. And MVM brings the heavy rock to the home of the genre

It’s a wonder that Aramantus aren’t too big-time to play this MVM showcase designed to show just how many great bands we have in the West Midlands. Last night they opened for Slipknot and Korn at the Barclaycard Arena. Kinda. The five piece actually played the arena bowl (singer Lou is proudly wearing a brand new Korn tshirt, presumably purchased last night, onstage) but it does show you how fast rising the band are. And with good reason too. Far more mature than their years, this is a band that just gets better every time you see them. That applies not just to their performance which is well-honed, but also to the material. New songs like “Voices” display a different side to their songwriting, but when they play older stuff like “Enough Is Enough” and closing song “Broken Trust” it is with a tremendous confidence. Add this to the fact they are band that clearly loves what they do, they are everything a young metal band should be. They’ve only been together a year, but you’d never know it.

Late additions to the bill they may be but Wolverhampton hard rockers Electus are here to bring the groove. Although they claim to be scared we don’t believe a word, as there is a cocksure swagger to their songs. Lead guitarist Richard and rhythm man, vocalist Russell dovetail really well, particularly on tracks like the mid-paced “Tomorrow,” which has more than a touch of Southern rock about it, and it passes MVM’s cowbell test….they find time for the evening’s first cover. Hendrix’s “Hey Joe” which Russell introduces as being “about an ex” – given its second line of “where you going with that gun in your hand,” we decide to keep on his good side. Actually with Electus it’s easy – there is a lot to like here. Closing tune “Morning Song” (“the first one we rehearsed back in 1653” says Russ) has a similar feel of Black Stone Cherry at their best, and Electus seem set to win a lot of votes (sorry, we had to!)

Buzzard flew (sorry again!) in, almost literally, at the last minute to complete this bill and the Dudley trio do a manful job. With stand-in drummer Jase behind the kit for the first time in two years – and after just one rehearsal if you don’t mind – they could be forgiven a touch of rustiness. Listening to them romp with abandon through Nirvana’s “Breed” allays any of those fears. Better still, though, is the marvellous crunch of their “Saturday Night TV” surely set to become their anthem, this damnation of the X Factor complete with its line “pick up your guitar and grab your drums” exemplifies the DIY attitude perfectly. “Pieces” carries on where this left off and comes complete with some really neat stoner-type licks. And on a bill to showcase West Midlands metal someone was always going to play Sabbath, it’s Buzzard, and “Paranoid” is one of the greatest songs ever written (as if anyone needed telling.) “No Quit” rumbles like Motörhead jamming on a Georgia Satellites song and as such is superb. Tellingly it’s dedicated to all the bands on the bill. “Friends And Foes” (“our only ballad” smiles Jimmy) highlights a sensitive side. “The Line” which ends things, is just rollicking fun and, as it is going to be their first ever video later this year, you can look forward to seeing a lot of it.

All of which leaves local stoner Kings Shebrew to finish things off, and such a task is well within their grasp. They are slow, heavy, downtuned brilliance. They proved as much on their phenomenal “Red Foreman” EP released last year as the follow up to 2012’s “Provenance” – which itself was a superb collection. They begin tonight with “….Foreman’s” instrumental title track. After which the trio – the heaviest act on tonight – set about showing the music that was invented in this City is alive, kicking and in the rudest of health. Less Desert Rock, more Spaghetti Junction Metal, Shebrew are what Kyuss would have been if they’d grown up in drizzle rather than sunshine. Massive great instrumental songs, superb lead work and – as befits the creators of the magnificent “I, Reptilian” – singer Frank can work his way a very decent hook when they want. The band are still as good now as when we first saw them, opening for Karma To Burn a couple of years back. Shebrew are one of those bands, who if they weren’t playing tonight, would be watching a band like them. That band probably wouldn’t be as good, because Shebrew are mighty. Even allowing for the ending that took everyone by surprise.

No one who was here would doubt that there was plenty in evidence tonight.