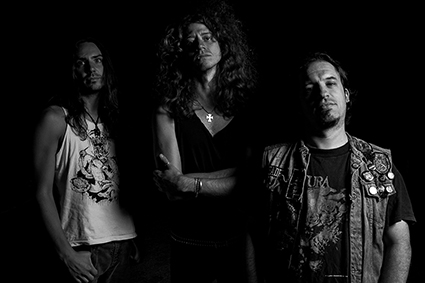 German Thrash Metal band Speedwhore was formed in Munich in 2006 by guitarist and singer Tim Kuntze and bassist Johannes Mikulits after having one too many beers at a metal festival.

The crazy idea took concrete form when soon afterwards Karlo Kuna and Sakis Tsouknidas joined the band on drums and second guitar respectively. After writing and rehearsing their first self-written songs they made their live debut as opening act for a befriended band at a local gig in a shabby garage in the suburbs of Munich.

The band went on to write songs with this line-up and shared the stage with many other underground metal bands in that time. The first output they released was their 2008 Rehearsal Demo containing the first two songs they have ever written: “Alcoholic Force” and “Too Late To Pray”. The next years were mostly dominated by live gigs, f.e. as opener for Sacred Steel on the Up The Hammers-Warm Up-Show in Athens, Greece…and heavy drinking. The next big change within the band occurred when Sakis Tsoudnikas and Karlo Kuno left the band and guitarist Sebastian Listl from Nuclear Warfare and drummer Martin Schiller joined the band.

After Martin Schiller left the band in the following year the three remaining members continued to complete the material for their planned first full length album. In 2013 Nils Later joined the band for the drumming position and with him the band recorded their first output after 5 years (a Rehearsal Demo Tape called “The Inferno Tapes”), played several gigs and finally began to record for their upcoming album “The Future Is Now” (three rough mixed songs from those sessions were also released as CD singles: “Grand War” and “The Machine / War Bastards”). Soon after the recordings were done Nils Later left the band and was replaced by David Neumüller. “The Future Is Now”, the debut album of Speedwhore became, despite its varied elements – ranging from slow Doom riffs to fast Black- and Death-Metal parts, a pure underground and old-school Thrash Metal release and finally saw the light of day in April 2015, when it was released by the German Heavy- and Thrash-Metal label Witches Brew.