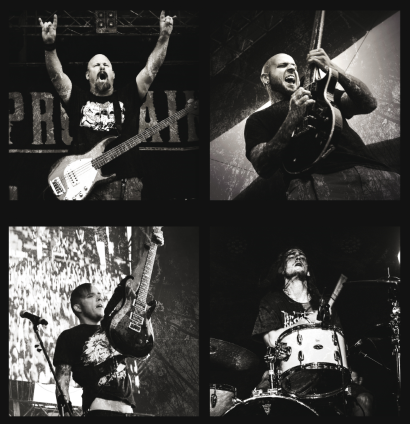 As the hardcore pioneers prepare for their 14th album, here’s all you need on the band

Aggressive, meticulous, passionate, righteous – all distinguishing traits that have come to symbolize the fundamentals of metal/hardcore pioneers PRO-PAIN.  Since their crushing 1992 NAIRD nominated debut album Foul Taste Of Freedom, PRO-PAIN have become a staple in the diets of heavy music listeners around the globe.  Their successful and enviable career has perpetually prospered throughout its course, and yet they still manage to find room to improve, and more importantly, impress.  Each and every PRO-PAIN album is a paragon of intensity, inspiration, honesty and unwillingness to compromise.  Their latest (and 15th) studio effort entitled Voice Of Rebellion is a testament to those very same qualities.

Recorded, mixed, and mastered by Corey Williams at Sound Lounge Recordings (Venice, Florida), Voice Of Rebellion features 14 punishing tracks which are sure to satisfy die-hard fans and new fans alike.  Production credits are shared by Williams and PRO-PAIN mainman Gary Meskil.  “This time around, I decided to get back into assisting with certain aspects of production, and we are thrilled with the end result.  Corey is a young and talented engineer/producer, and the sonic brutality we collectively achieved speaks for itself (in my opinion)” says Meskil.

The album kicks off with a blistering and infectious title track (which is destined to become a PRO-PAIN classic).  Songs like No Fly Zone and Age Of Disgust take the listener back to the bands groove laden glory days, while new ground gets forcefully broken with tracks such as Hellride and Souls On Fire.  The entire spectrum of the bands musical influences are proudly displayed and are tastefully explored within the contents of this explosive album.  Lead guitarist Adam Phillips states: “The writing process for Voice Of Rebellion was a complete collaborative effort, unlike it’s predecessor.  So, the end result is a multi-dimensional onslaught of heaviness”.   Meskil adds, “This is a definitive album for PRO-PAIN, as it speaks very well for us with regard to who we are and what we represent as a band”.

Formed by vocalist/bassist Gary Meskil (ex-Crumbsuckers), New York-based PRO-PAIN have over the years benefited from substantial support from an ever-growing and loyal fan base, the Metal Press, Hard Rock Radio, and MTV’s Headbanger’s Ball.  With band mates Marshall Stephens (Rhythm Guitar), Adam Phillips (Lead Guitar) and Drummer Jonas Sanders, the band are set to tour the US and Europe extensively in support of Voice Of Rebellion, as their collective catalog sales surpass one million units sold!