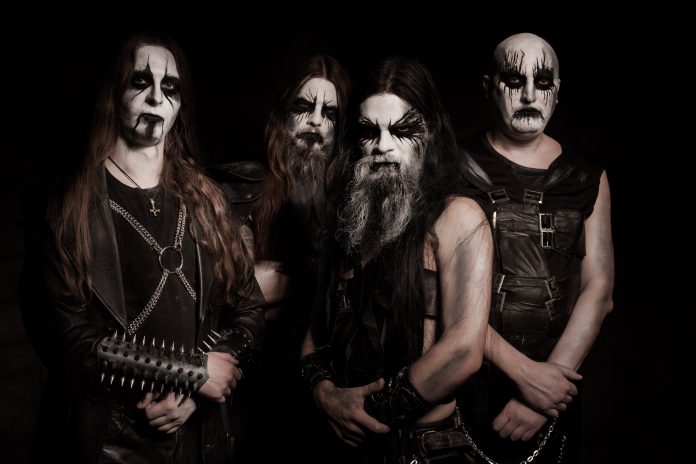 Morkesagn are a Black Metal band from Kiev formed in 2013. The name was taken from the Norwegian language and means “Dark Legends” Founded by band’s lead vocalist, guitar, composer and songwriter Ekvil. In 2006 he founded a band named Atterum Ignis that released one EP and full-length album entitled “Shadows Creation”. However, in 2013 the name of the band was changed to Mørkesagn and later the Norwegian “ø” was replaced by “o” for simplicity of typing the band name and better promotion. During this year the band took part in many local concerts and festivals.

In the Autumn 2015 Morkesagn finished recording the album “Where The Darkness Never Ends” and set its release date to be November 2015. After two months looking for a label Farn, guitar and back vocalist of the band, decided to take a responsibility for the album release and promotion.
Morkesagn lyrics are based mostly on the mythology of Greece and partly on Scandinavian mythology. Almost all album songs share similar dark, spiritual and mystic themes.
Since the foundation of Morkesagn it has changed almost all its members. First members of the band came from old Atterum Ignis: Ekvil (Andrew Vereshchagin) — guitar/vox, Karalum (Yurij Sargantovych) — bass, Zlobnyk (Eugene Garbar) — guitar, La de Vill (Dmitri Sychev) — drums.
Soon Zlobnyk was expelled from the band and Farn (Eugene Gavrilyuk) became the second guitarist of the band since the end of 2013. One year later Karalum left the band too and his place was taken by Heydvald (Vlad Lykhatsky). In the Spring of 2015 La de Vill was also expelled and the album “Where The Darkness Never Ends” was recorded with the help of session drummer Lev Kurgansky. Finally, in September 2015 Beird (Alexander Gilevich) became the new drummer of Morkesagn.