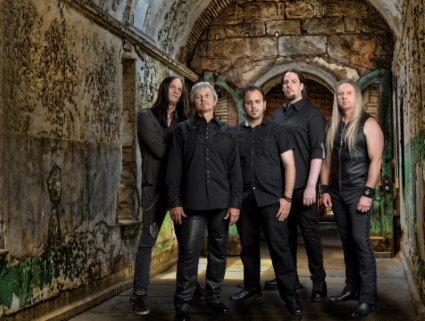 We’ve just told you about their new album. If you like the sound of that, here’s their history

Millennial Reign was formed as a solo album project by ASKA Bassist, Dave Harvey. Writing for the album began in 2010 as Dave searched for the right vocalist and drummer. Bryan Diffee who had worked with Dave in a prior band a few years earlier was recruited to play drums. Once a solid drummer was secured, Trae Doss came on board to write and record vocals. All guitar, bass and key tracks for Millennial Reign’s debut self-titled album were written and recorded by Dave Harvey. The album was recorded at The Recovery Room Studio with engineer Ty Sims and released independently in 2012.

A year or so passed and Dave decided to start writing material for the second album. Trae and Bryan weren’t available to work on the sophomore album so Dave began searching for a vocalist as music writing continued. James Guest of the multiple album project Eden’s Realm replied to an online ad and it was soon obvious that he was definitely the right guy for the job.

As writing between both Dave and James began, Wayne Stokely who had worked with Dave in various projects was recruited to record drums. After some discussion as things progressed, the decision was made to make Millennial Reign a full band, rather than just a recording project.

Several bass players were auditioned and Daniel Almagro, who works with Wayne in their powermetal band Infidel Rising was chosen. Once Daniel was on board, full band rehearsals began as they continued the search for the right second guitarist.

Months of rehearsals went by with several sporadic guitarist auditions, and the final member Jason Donnelly was chosen as second guitarist. Wayne, Daniel and Jason were all a perfect fit and things began moving forward at a great pace.

Once recording was finished, mix and mastering took place at Nomad Studio with engineers JT Longoria and Gary Long. A deal was made with Swedish label Ulterium Records for an October 30th release in both Europe and North America for the new album “Carry The Fire”.

Fans of Iron Maiden, Queensryche, Judas Priest and Crimson Glory will not be disappointed with this new album. Millennial Reign should be in any collection of melodic or traditional powermetal.