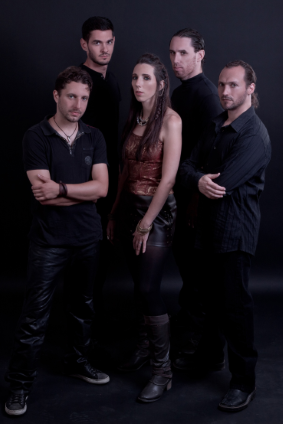 Kerion is a symphonic metal band from Nice, France that was formed in 2002. They released two demos conceptually based on the heroic-fantasy tale “Staraxis” written by Chris Barberi: the “Conspiracy of Darkness” and “The Last Sunset”. In 2008 their first album “Holy Creatures Quest” was released and showed a powerful and distinguished kind of Symphonic Metal: direct, aggressive, epic and poetic.

Kerion presented something from the start that made them stand out in the scene. They had a majestic choir directed by Phil Gordana [Fairyland], an impressive cover artwork by JP Fournier [Avantasia, Edguy] and a powerful production by Wildric Lievin [Hamka, Fairyland] and Guillaume Serra at Harkam Studio.

During 2010 the second album “The Origins” was released by the young Canadian label Metalodic Records. The album was the start of the Barberi’s tale. Newer fans had also requested to hear old demo’s so the band decided to rewrite some of the songs and record them properly and include them on this album.

Kerion had grand plans for their new album and in 2012 the next album “CloudRiders Part 1 : Road to Skycity” was released. It was a concept album with a whole new fantasy story and the music was a blend of the classic Rhapsody of Fire inspired symphonic power metal together with folk and celtic music inspired by bands like Elvenking. The album was very well received around the world and Kerion was growing as a band with this strong album together with touring after the release of the album.

Finally the time has come to present the new Kerion album, and the follow up to the 2012’s “Road to Skycity” album, entitled “CloudRiders Part 2: Technowars”.

This time Kerion had the goal to make every aspect of the release better and have come up with an impressive album. The concept on the album is the conclusion of the CloudRiders story, an epic battle between the old world and Skycity’s army.

The album includes impressive performances by guests like Elisa C. Martin [DarkMoor, Dreamaker], Rachel Aspe [ETHS], Phil Giordana [Fairyland], Raphael Dantas [Caravellus] and Fil Palmer [Replosion]. The production was once again handled by Willdric Lievin and the artwork was created by Genzoman, famous for his involvements with World of Warcraft and Marvel.

“CloudRiders Part 2: Technowars” takes you on a majestic journey filled with symphonic power metal, cinematic influences and even some electro influences. Kerion boldly steps out and call this style “Comics metal”.