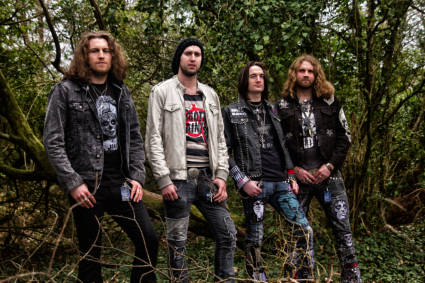 Cumbrian Rocksters ‘Heartbreak Remedy’ are not the easiest band to pigeon hole. By merging a heady mix of contagious Rock ‘n’ Roll, pitching the groove of Lynyrd Skynyrd with the guile of Deep Purple and the vigour of Thin Lizzy, Heartbreak Remedy are poised to take their ballsy concoction of Rock to the nation this Summer in the shape of their debut album ‘Midnight Groove’, out 11th September.

Heartbreak Remedy took its first breath in 2013 when Matty Penn (Bass and Lead Vocal) and drummer Stephen Jackson hatched a plan to form a band that embraced LA’s classic rock sound, but with the groove of the seventies set against a modern backdrop. It wasn’t long before Callum Glynn (Guitar) and Luke Blair (Guitar) joined the ranks, and Heartbreak Remedy were born. The quartet quickly sprung to life and the chemistry within was instantaneous. Within a month, the band were ready to roll, making their live debut at Trillians in Newcastle playing alongside Enuff Z’nuff.

Throughout 2014, the rock crew played throughout the country and supported ‘The Last Vegas’ on their full UK tour. Heartbreak Remedy went on to notch up supports with everyone from The Quireboys, The Electric Boys, Kory Clarke/Warrior Soul, The Burning Crows, Bad Touch, Falling Red and Knock Out Kaine.
More recently, the band have shared stages with Hardcore Superstar, Keri Kelli (ex Alice Cooper, Slash’s Snakepit) and Brad Gillis (ex Ozzy Osbourne). On the back of this run of successful shows, the quartet were also asked to play the Hard Rock Hell Road Trip in Ibiza, where they were joined Massive Wagons, SKAM# and Texas Flood.

Besides extensively touring the country’s highways, the rockers also released two EPs to widespread praise. And now, the band have their explosive debut album ‘Midnight Groove’ ready for national consumption. With thirteen tracks of groove-tinged rock ‘n’ roll, Heartbreak Remedy have delivered a record that pools from everyone from Motley Crue, ZZ Top and Deep Purple, through to Aerosmith, and it’s a true firecracker. With a host of festivals lined up throughout the Summer, and a series of shows planned during the coming months, you don’t want to miss this band.

The band originally stuck out the album in the Spring. Here’s MV’s review