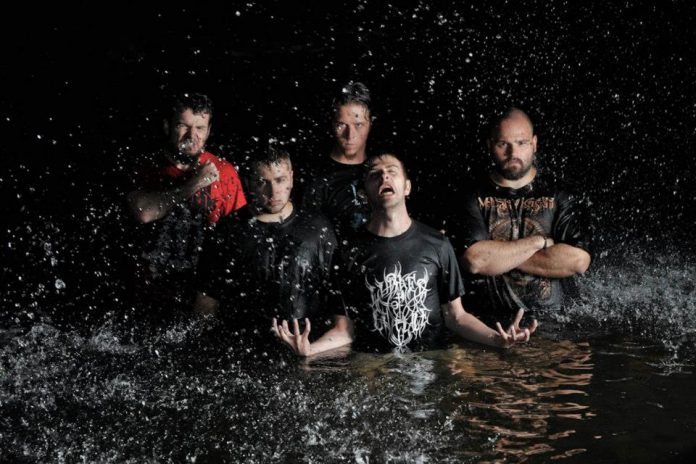 Death metal from Canada and they are exhausted
Emerging from the frightening expanse is an atmospheric force called …From The Deep whose ever changing style keeps fans of metal on their toes. Each album has a continuous story flowing from one to the next while thematically focused on the insignificance existence when faced with the vast intricacies of the universe, esoteric literature, consciousness, and the exhaustion of modern life. The band has an inclination for the absurd and deeply disturbing in terms of instrumentals and lyrics.
Nearly all the members have gotten their sea legs in the Ottawa scene. Vocally, Graham Cwinn is an intimidating force bellowing from hell while Jacob Sparling and Mike Birch tear their guitars to shreds with the utmost precision. Dave Solomon sounds like a thunderous force rumbling within each song as he slams his bass. The final element that weaves together the band’s sound is Nicholas Kaminski on drums who dominates the pace for the music and acts as an conductor demanding attention and obedience, musically.
Each opus swells like the tide with a natural yet rhythmic rise and fall making the tension in each song more visceral and the release more satisfying. Musically, the band is as unpredictable as the changes in the sea by straddling between nefarious black metal and downtrodden thrash. Vocally, the band is a tortured soul twisted by the waves and swept to sea crying out for rescue.
…From The Deep released their most terrifying piece to date ‘The Absurd Horror’ (July 2015), which is available on Bandcamp at https://fromthedeepband.bandcamp.com/. Featuring epics written about Greek myths and human survival, this is one band that will leave you with the feeling of being hopelessly lost on an unrelenting ocean, clinging to life.
Bandcamp | Facebook | Twitter @FromTheDeep613 | Youtube