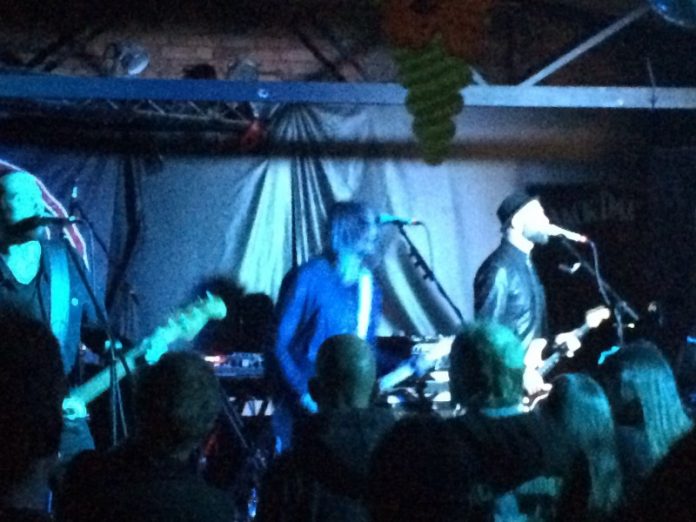 Finnish arena bothers do it in intimate surroundings

Tiny stage space tonight notwithstanding – and singer Khaled Lowe is literally on his knees a couple of times to perch where he can – there’s just a suspicion that London’s premier purveyors of psychedelic prog, Messenger, could be on the verge of a big breakthrough. They’ve got a new record deal (and let’s face it, being on the same label as the likes of Steve Hackett and Devin Townsend isn’t a hindrance is it?) and they’ve got a new record out in April, but it’s more than that. There’s an air of confidence about them, and about Lowe in particular that seems to suggest big things are in the offing. When you add this to the songs they already have, on the stunning “Illusory Blues” record – and “Midnight” and “Solmniloquist” from it, in particular thrill here – that’s a pretty potent mix. There’s a couple of new ones included to whet the appetite for a months time, “Balearic Blue” features some fine vocal interplay and there’s an almost primal quality to “Celestial Spheres”. There’s enough here to think that album number two could be very special. Similarly as “Dear Departure” reaches its magnificent crescendo then the same can be said about the band itself. Messenger will surely get people talking.

It’s the Von Hertzen Brothers first time in Birmingham and frontman Mikko is marking the occasion by wearing a Black Sabbath t-shirt. He and his four bandmates waste no time in cranking out the riffs to celebrate too, with the title track of last year’s album “New Day Rising” and “You Don’t Know My Name” providing a breakneck opening salvo as they do on the record itself.

Genuine arena dwellers back home VHB don’t appear too fazed by the more….intimate ….setting they find themselves in here. The gregarious and amusing Mikko jokes about the lighting, about the curfew and generally has the crowd eating out of his hands in mere minutes.

From here on in they deliver a pretty textbook lesson as to how they became such huge stars in Finland, “Sunday Child” has a chorus that can only be described as “humongous” and “Coming Home” has a screeching lick, while “Flowers And Rust” gives the brothers in the band the chance to display what we might call some family harmonies.

The real charm of them though is that they are prepared to play requests too. Mikko explains that someone handed him a piece of paper this afternoon (“I don’t have it, it’s in my other trousers, these are my show pants” he offers) and they play “Always Been Right” as the fan wanted, but more than that, they seemed to enjoy it too.

A set that got the balance between the rock elements and the prog side to their sound just about spot on, ends with a mammoth “The Willing Victim”, but that is rather outdone in the size stakes by “Prospect For Escape” which ultimately concludes this 95 minute journey as if lives depend on it.

It’s perhaps fair to say that the UK might have been a little slower than some places to catch on to the Von Hertzen Brothers. However, room by room, person by person, they seem not just absolutely determined but also absolutely able to win everyone over. Tonight was a fine way to make a first impression on the second city.