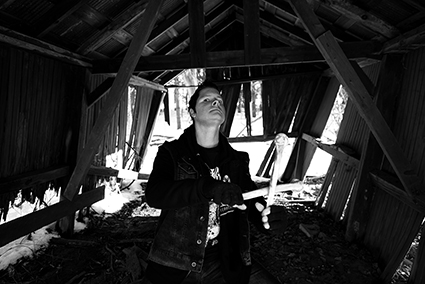 Here’s the other half of trhe “Necromantic Passages” split under the microscope
FETID ZOMBIE is the solo death metal effort of renowned underground illustrator, Mark Riddick. While Riddick operates alone in the composition and execution of FETID ZOMBIE’s material, he often recruits well-known and respected guest musicians on his titles.
Riddick is no stranger to publishing death metal music, having firmly rooted himself in the underground scene since his first demo efforts under the UNEARTHED and EXCRESCENT monikers circa 1991. Although FETID ZOMBIE has shifted musical courses in its path toward self-discovery since its genesis in 2007,FETID ZOMBIE has remained grounded in its old school death metal approach, executed by a real veteran of the scene.
FETID ZOMBIE’s style employs death metal in the most classic sense while bringing to the table traditional heavy metal elements throughout; showcasing Riddick’s broad appreciation for the music he has dedicated his talent and craft to for the past two and a half decades.
Bandcamp: fetidzombie.bandcamp.com
Facebook: www.facebook.com/fetidzombie