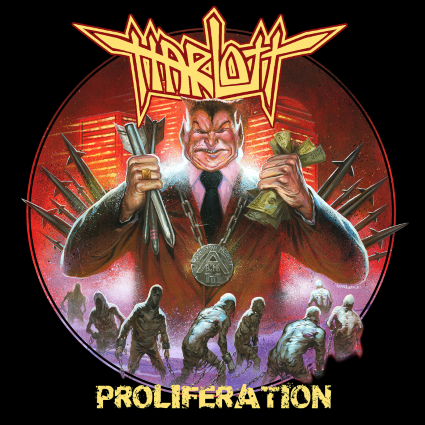 Thrash, baby. No ifs no buts, no maybes. Just thrash.

There has, as we’ve noted recently on this site, and certainly if the albums that land in in our inbox are any guide, been some signs of thrash metal waking from its slumbers.

For too long, the venerable old beast allowed itself to be sidelined by too many genres with the suffix “core” or the prefix “post” attached to their names. The good news for those who like to keep things simple is that this, the second album from Melbourne’s Harlott, doesn’t want to be post anything. It only wants to thrash. And thrash like a maniac too.

Now, it could be argued that this presents a particular set of issues. Not least of which is thrash, well, it’s been perfected. About 30 years ago on the first Megadeth, third Slayer, third Anthrax, and second Metallica albums (there’s not a debate to be had about this – ever). So what do you do? Well luckily the undaunted Aussies have thought of this. And the answer is easy, you just sound like all of them.

That’s why on “Lord Of War” you’d swear that Tom Araya was screaming and not Andy Hudson. That’s why on “Civil Unrest” an anger that Scott Ian’s boys used to muster flows throughout and that’s why this is so good.

Things begin in suitably epic fashion. The opening strains of the title track could have come straight from Game Of Thrones, the calm only lasts for about 20 seconds. Everything which follows is a sonic maelstrom. The band know nothing here is original. They couldn’t care less and neither should you. Instead, you should just headbang your way through songs like “Bloodlust” which Is short, sweet and two minutes of outright brutality.

There’s 12 songs here, and not a moment where the quality dips. It’s superbly played, lovingly conceived, and shot through with such an evident love for the genre they are playing that even the biggest sceptic will surely be won over. Any lingering doubts that would may be remaining are rather wiped away by the incredible “Legion” and the unconcealed menace that abounds all over “Means To An End.”

The times they are a-changing. And everyone who thought thrash was dead is just plain wrong. It’s not only very much living and breathing, it’s looking back to the past to find its future.

Their first album got them noticed by Dave Elfesson and saw them bag support slots with Accept. Who knows where they’ll be after this? Nasty, brutal old school and superb. That’s Harlott and that’s “Proliferation.”